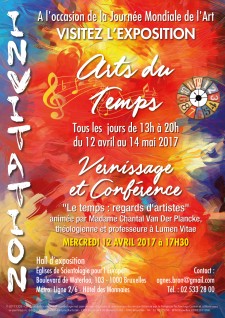 Brussels, Belgium, April 25, 2017 (Newswire.com) - The Brussels branch of the Churches of Scientology for Europe hosts a monthlong art festival each year in honor of World Art Day, April 15, the birthday of Leonardo da Vinci.

The artwork is on display on the ground floor of the Church and in its expansive Public Information Hall. It is open to the public April 12 to May 14 at Boulevard de Waterloo 103 in the heart of Brussels.

In his book Science of Survival, L. Ron Hubbard described the role of artists and their importance to society as a whole:

“The artist has an enormous role in the enhancement of today’s and the creation of tomorrow’s reality. He operates in a rank in advance of science as to the necessities and requirements of Man. The elevation of a culture can be measured directly by the numbers of its people working in the field of aesthetics ... Because the artist deals in future realities, he always seeks improvements or changes in the existing reality. This makes the artist, inevitably and invariably, a rebel against the status quo. The artist, day by day, by postulating the new realities of the future, accomplishes peaceful revolution.”

The festival is open to the public 9:30 a.m. to 10 p.m. weekdays and 9:30 a.m. to 6 p.m. Saturday and Sunday. Providing a venue for local artists to display their works, the 19th-century landmark also welcomes local residents and tourists to browse the exhibition, stop by the Church café or its outdoor patio, or attend one of a variety of musical programs throughout the month.

St. Louis Volunteer Ministers Promote Prevention to Bring New Cases of COVID-19 Under Control
Within a week of Missouri reopening for business, coronavirus cases rose by nearly 11 percent. "If we want to reboot our economy, we need to practice prevention," say the Volunteer Ministers of the Church of Scientology St. Louis.
Scientology - Jul 2, 2020
Newswire