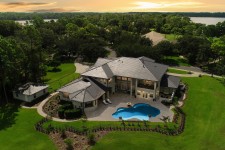 ORLANDO, Fla., October 11, 2018 (Newswire.com) - Nathan Morris, of the Grammy-winning music group Boyz II Men, has another hit production on his hands. Only this time, he’s applying his creative genius to a stunning home renovation. Starring in the new DIY Network series “Hit Properties with Nathan Morris,” the singer takes a 9,200-square foot Orlando estate in need of some TLC, and transforms it into a magnificent modern estate. Located at 9137 Sloane Street, the property is currently being offered for sale at $4.9 million. Peter Luu of Premier Sotheby’s International Realty’s Orlando office is the exclusive listing agent.

Originally built in 1996, the home is situated on 1.26 acres, featuring five bedrooms and six-and-a-half baths. Throughout the series, Nathan is a hands-on remodeler who upgrades the residence with an abundance of luxury appointments. From a gourmet kitchen and two master bedroom suites to a resort-style pool and remote-controlled toilets, the finished product will surely achieve celebrity status.

“The original home had great bone structure. One of the best parts of its transformation was the kitchen — which used to have a vaulted ceiling that was made into an office space and man cave. What used to be a ‘Great Gatsby’ house in the neighborhood is now going to be one of the premier homes in the area.” — Peter Luu, Premier Sotheby’s International Realty.

Headquartered in Naples, Florida, Premier Sotheby's International Realty has over 1,000 associates and employees in 40 locations throughout Florida and North Carolina.