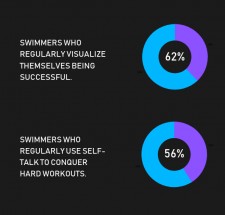 VICTORIA, British Columbia, October 18, 2019 (Newswire.com) - Forty-two percent of collegiate swimmers feel scared “most” to “all the time” when racing, according to a study from YourSwimLog.com.

The research, which surveyed 98 swimmers from four elite NCAA swim programs, also discovered a majority of college-level swimmers have specific goals, use mental skills to perform their best in competition, and struggle with comparison-making against other swimmers.

Olivier Poirier-Leroy, a former national-level swimmer and author of Conquer the Pool: The Swimmer’s Ultimate Guide to a High-Performance Mindset, was surprised to see how many of the swimmers surveyed felt scared before racing.

“Coaches and sport psychologists have long talked about the importance of having a killer instinct on race day,” says Poirier-Leroy, who qualified for Olympic Trials as a swimmer, “but it was surprising to see how many swimmers, who are among the best in the country, struggle with having the right mindset behind the blocks.”

In addition to feeling scared before big races, swimmers also reported having difficulty managing their emotions when under pressure (56%) and spending too much time worrying about what might go wrong in competition (76%).

Other key findings from the case study:

Most college swimmers set goals. Nearly 70% of the swimmers reported having clear goals for the season, but when asked if they had a clear idea of what needed to happen on a daily basis, this number plummeted to just 29%.

Comparison-making crushes self-confidence. Sixty-seven percent of collegiate swimmers admit that when comparing themselves to other swimmers, it tends to rob them of confidence.

Most college swimmers use mental skills to swim their best. Mental skills are a big part of elite competition. Over 60% of swimmers use visualization to increase confidence and build a successful performance in their mind. Fifty-six percent use designated self-talk during practices to keep themselves focused.

Olivier Poirier-Leroy is a best-selling author and former national-level swimmer. He is the writer of two books for competitive swimmers and consults with coaches, swim teams and swimmers to help sharpen their mental game in the water.