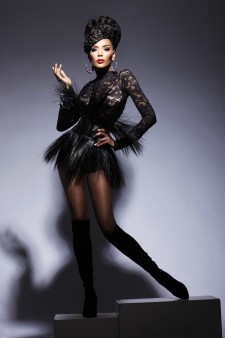 New York, New York, May 31, 2016 (Newswire.com) - Former supermodel and world’s leading runway expert Lu Sierra will be continuing her 9th straight year as the runway coach for the Miss USA 2016 pageant on June 5th, 2016 held at the T-Mobile Arena in Las Vegas, Nevada.

The organization invites Lu Sierra each year to offer her runway expertise and coach each young lady on how to bring a winning presence and be their best in every category of the competition during the televised broadcast of Miss USA pageant.

Recognized for her talent Lu Sierra was hired to coach the young ladies on the runway portion of Miss U.S.A and Miss Universe pageants in 2008 by then owner Donald Trump.  She has since become one of the top runway / pageant coaches with winners and clients world-wide. Lu was the coach who nurtured Olivia Culpo to her double win of both Miss USA and Miss Universe.

Lu Sierra made her mark on the world of fashion as the runway muse to some of the world’s top designers - Oscar de la Renta, Givenchy, Bill Blass, Patrick Kelly, Escade, Bob Mackie, and Yves Saint Laurent.  Lu walked the runway before and with other super models such as Naomi Campbell, Christi Turlington, Linda Evangelista, and former first lady of France Carla Bruni.

She became known as “Runway Lu”, commanding the runways of Pierre Belman, Yves Saint Laurent​, Patrick Kelly, Krizia, Fendi, Giorgio Armani and Versace to name a few.  She was cherished by both Bob Mackie and Givenchy for her look, style and skill on the runway.  She still models in New York and abroad. ​

As well as coaching, Lu brings her winning expertise into the hands of models and pageant contestants of all ages.  Modelversity, the only app of its kind, is  a quick-look advice and technique tool where Lu Sierra outlines important information and tips.  Integrated with both text and video instruction, it’s almost as though you were taking one of her classes. Modelversity is available on iTunes and Google Play store.

Educational company started by former top model Lu Sierra which specializes in motivational speaking, and arts education with a focus on fashion.