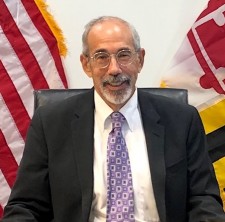 Weinberg said about joining his new firm, “I’m really excited to be back here and practicing again. I never planned to go back into private practice, but working with a group of this caliber, while still being able to pursue my mediations is the only situation that could have drawn me back.”

Warnken, LLC managing attorney Byron Warnken stated, “We are very excited to have Jeff. He was an excellent claimants’ attorney for many, many years in private practice before the Bench. After calling balls and strikes for more than a decade, it’s really exciting to see him step back into the batter’s box for injured workers. He’s going to be great.”

Jeff Weinberg will continue to operate his private mediation practice outside of Warnken, LLC, wherein he puts on a different hat trying to bring parties together for successful resolution of cases.

Warnken, LLC is a law firm representing the injured throughout the State of Maryland.  Warnken, LLC has been General Counsel to the Maryland Troopers Association for more than 20 years. Warnken, LLC has a focus on workers’ compensation, personal injury, law enforcement, and medical malpractice.

Pro Bono COVID-19 Workers' Compensation Representation
For healthcare workers or a public safety employees exposed to COVID-19 at work, Warnken, LLC will represent you for free. We want to help.
Warnken, LLC - Apr 1, 2020