Rev. Frederick Shaw warns about the dangers of psychotropic drug use in the foster care system 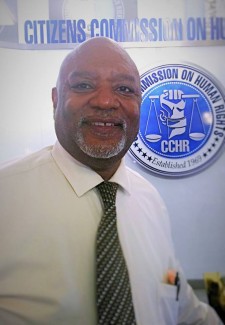 Los Angeles, California, June 27, 2017 (Newswire.com) - A former group home owner for troubled young boys, sheriff deputy and current NAACP member has joined forces with CCHR to educate against foster children being prescribed antipsychotic drugs at double to quadruple the rate of those not in foster care. African American children are over-represented.

The Citizens Commission on Human Rights International (CCHR), a 48-year mental health watchdog group, announced the appointment of Reverend Frederick D. Shaw Jr. as its Director of Public Affairs and International Spokesperson. Rev. Shaw is a former youth worker and Los Angeles County sheriff’s deputy and is a current Vice President of the Inglewood/South Bay branch of the National Association for the Advancement of Colored People (NAACP). Rev. Shaw, who has been a child advocate for 25 years, said his first job is tackling the high usage of psychotropic drugs in the foster care and juvenile justice system and the over-representation of African American children in these.

In a resolution that Rev. Shaw helped draft, which calls for legislative protections for foster children, he says: “Foster children are being given cocktails of powerful psychotropic drugs and federal inspectors found more than half the children nationwide are poorly monitored.”[1] Yet, these drugs, according to studies and drug regulatory agency warnings, have adverse effects including: stroke, pancreatitis, obesity, and diabetes.[2] Those children taking atypical (newer) antipsychotics may add eight to fifteen percent to their weight after taking the drugs for less than 12 weeks.[3] A variety of psychotropic drugs are associated with cardiac side effects, including arrhythmia and sudden death.[4]

Rev. Shaw is especially concerned about “Black children being over-represented in foster care and in special education.” While only 14 percent of the total child population is black, African-Americans represent 24 percent of the foster care population nationally.[12] Some counties can be significantly higher than this, such as one California county at 55 percent.[13] African-American youth have the highest rates of involvement in the juvenile justice system compared to other racial groups. They comprise 30 percent of juvenile court referrals, 38 percent of youth in residential placement, and 58 percent of youth admitted to state adult prison.[14]

In an article headlined: “The Black Academic Holocaust: Psychotropic Drugs and Black Students,” Dr. Rick Wallace, Ph.D., Psy.D., said that black youths are being “prescribed psychotropic drugs at an alarming rate — with some being prescribed these medications as early as at the age of 18 months.”[15]

Dr. Wallace further advised black parents to be aware that a “mental illness diagnosis is highly subjective, depending on professional perspective and school of thought. The diagnosis of mental illness in children is far from an exact science. Modern psychiatry has expanded its reach to the point that even the most normal of emotions and mental states are now labeled as one ‘disorder’ or another.”

“There’s a tremendous push where if the kid’s behavior is thought to be quote-unquote abnormal — if they’re not sitting quietly at their desk — that’s pathological, instead of just childhood,” says Dr. Jerome Groopman, a professor of medicine at Harvard Medical School and the author of How Doctors Think.[16]

Rev. Shaw believes that the combination of a subjective diagnostic system, potentially dangerous drugs and children under state control where these drugs can be forced on them, breeds abuse. Sonya Muhammad, a retired counselor with the Los Angeles foster care system and a CCHR Commissioner (advisory board member), agrees. She encourages those working in the foster care system to speak out if they see something is wrong, especially when it involves drugging a child. (Click here to report psychiatric abuse to CCHR.)  She co-authored the resolution Rev. Shaw wants to see passed at state and federal level.

In 2004, Rev. Shaw assisted CCHR in obtaining federal U.S. legislation called The Prohibition on Mandatory Medication amendment that prohibits children being forced to take prescription psychotropic drugs as a requisite for their education. As CCHR’s newly appointed spokesperson, Rev. Shaw said this needs to be extended to the juvenile justice system, foster care and generally for all children treated in the mental health system.

CCHR is a mental health industry watchdog organization that works for patient protections and encourages the public to take action against mental health abuse. In the course of its 48 years it has helped get more than 180 laws enacted. As a nonprofit, CCHR relies on memberships and donations to carry out its mission and actions to curb psychotropic drug use in foster care. Click here to support the cause.

[6] "Reichert Opening Statement: Caring for Our Kids: Are We Overmedicating Children in Foster Care?" House Committee on Ways and Means, 29 May 2014, https://waysandmeans.house.gov/reichert-opening-statement-caring-for-our-kids-are-we-overmedicating-children-in-foster-care.