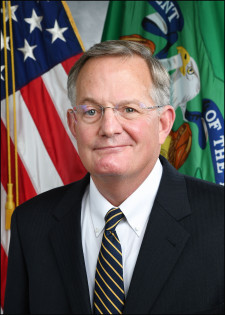 EAGAN, Minn., February 22, 2022 (Newswire.com) - Asset Marketing Services, LLC (AMS), one of the largest direct-to-consumer retailers of collectible coins, announces that David J. Ryder, the former Director of the United States Mint, will advise the company on an exclusive basis.

In his new role as a trusted advisor to AMS, Ryder will provide insight to the company on the development of new products and new international markets. Ryder's goal is to expand numismatic products globally through the company's U.S. businesses, GovMint.com and ModernCoinMart, and its Asia business, LPM Group Limited. AMS markets to consumers via its websites GovMint.com, ModernCoinMart.com and LPM.hk.

Ryder's global experience in numismatics, coupled with AMS CEO Bill Gale's 39-year career in the industry, creates a unique opportunity for the company to continue its mission to be an industry leader and to create outstanding products for collectors. Gale is a nationally recognized numismatist who has an unrivaled ability to capture the fascinating stories behind collectible coins.

"We are thrilled to have Dave working with us to bring exciting new products to life and to bring those products to collectors around the world," said Gale, CEO of AMS. "His creativity in developing commemorative coins and his experience in taking them to market is unmatched in our industry, and it will keep AMS at the forefront of the field."

Ryder also was instrumental in the redesign of the 2021 American Gold and Silver Eagles for the program's 35th anniversary and guided the issuance of silver dollars commemorating the 200th anniversary of the construction of the White House. The U.S. Mint also produced its first quarters with a privy mark under Ryder's leadership.

"I'm looking forward to this new business partnership with Bill and his team," said Ryder. "It's going to be exciting for me to work alongside many of the global Mints I spent time with as the U.S. Mint Director in developing new and innovative products for numismatic collectors globally."

Ryder helped implement the 1921 Silver Dollar Anniversary Act, which authorized the mintage of 2021 Morgan and Peace Dollars for their centennial anniversary and lead the initiative to pass the groundbreaking Circulating Collectible Coin Redesign Act of 2020. In all, Ryder's projects generated more than $5.4 billion in revenue for the U.S. Mint in 2021.

Ryder also has extensive international experience, having led the Pride of Two Nations collaboration between the United States Mint and the Royal Canadian Mint (RCM), as well as the Mayflower project with the British Royal Mint. During his career, he has traveled to more than 160 countries and has relationships with Mints worldwide.

He also helped lead the formation of the Secure Products Corporation, which developed highly secure advanced anti-counterfeiting security features for many of the world's largest Central Banks and corporations. Secure Products Corp. was acquired by the Honeywell Corporation in 2007. In addition, Ryder served as Deputy Treasurer of the United States, Deputy Chief of Staff to Vice President Dan Quayle, and Special Assistant to Vice President George H.W. Bush.

In addition to serving as a strategic advisor for AMS, Ryder will also act as an ambassador and may be seen at limited speaking engagements in the upcoming weeks and months at trade shows and industry events.

Ryder has also agreed to serve as a strategic advisor for AMS, and Ryder has also agreed to hand-sign coin labels with the trusted third-party grading service Numismatic Guaranty Corporation (NGC). NGC Signature Labels honor people who have made the greatest contributions to numismatics, and the David J. Ryder Signature Labels will be available through select retailers, including the AMS brands.

Since 1984, Asset Marketing Services, LLC (AMS) has provided collectors, history buffs & others with the finest numismatic and collectible coin products. Its brands, GovMint.com, ModernCoinMart, and LPM.hk, combine to make one of the largest direct-to-consumer marketers of coins and numismatics.

Since 1984, Asset Marketing Services, LLC (AMS) has provided collectors, history buffs & others with the finest collectible products. Its brands, GovMint.com, ModernCoinMart, and LPM.hk, and Collectors Limited combine to make one of the largest direct-to-consumer retailers of collectibles.