Protect your home from wildfire with Sun Fire Defense 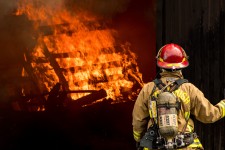 LOS ANGELES, October 31, 2019 (Newswire.com) - ​​​​​Warm October nights and Santa Ana winds are a recipe for disaster in areas plagued with devastating wildfires. But a new, NASA-inspired technology could cool down your concerns. ​

Sun Fire Defense Systems, a Los Angeles company has developed a coating technology that when sprayed to the surface of a home, can protect it from temperatures exceeding 3,000F. They specialize in structural fire protection for homes and businesses in wildfire areas. This includes remote and heat sensing exterior sprinkler systems for added protection.

Sun Fire Defense wraps were tested and used on Space Shuttle launch structures.  The fire wraps constructed of a combination of the fire blanket used on the Space Shuttle and nano ceramic coatings that endure temperatures up to 6,000F and 70,000lbs of thrust.

The Department of Energy along with Bonneville Power Administration, performed a  lightning strike simulation test on a utility pole treated with Sun Fire Defense SPF 3000. The wood utility pole commonly most commonly used by utility companies, self extinguished within 10 seconds.  SPF 3000 is a clear silicone spray that lasts years and won't affect the appearance of your home.

Sun Fire Defense helped save homes In the Woolsey Fire that devastated the Malibu area last year destroying over 400 homes. CEO, Jim Moseley states that "Sun Fire Defense has helped save 4 homes up to this point with no losses,  however one can never be overly confident and this is why we use several layered technologies, two of which were developed by seasoned wildland firefighters."

Electrical flares are the newest threat in the fight against wildfires

The Bonneville Fire Department was looking for a way to combat electrical fires started by lightning. They discovered that when a utility pole coated in SPF 3,000 was hit with 500,000 volts of electricity, the flames self-extinguished within 10 seconds, while the second uncoated pole continued to burn. After seeing the protective qualities of SPF 3000, Bonneville power commissioned Sun Fire Defense to apply SPF 3000 protective coating to utility poles in high-risk areas. Sun Fire Defense featured on the Discovery Channel.

In the race to make civilian space travel a reality the engineers one of the top players in civilian space exploration encountered a problem. The structures used to hold the rockets had the tendency to melt  . Sun Fire Defense developed a custom layered wrap that was able to protect the steel structure from the 5 minute exposure to temperatures nearing 6,000 degrees and 70,000 foot pounds of thrust. Sun Fire Defense was able to protect these costly structures from incredibly high heat and thrust exposure and allowed the rocket launch structures to be reused over and over without damage.