For Patricia Mince, the Fight Against Breast Cancer is On 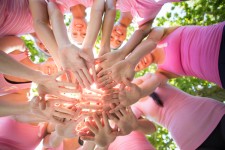 Santa Cruz, CA, June 5, 2017 (Newswire.com) - Breast cancer is still one of the greatest killers of women in this country in particular. In fact, around 12% of women are expected to be diagnosed with a form of invasive breast cancer during their lifetime. It is a disease, therefore, that affects almost every woman in some way at some point during her life. It is possibly for this reason that so many women take it personally, and take on a fight against this horrible, destructive disease.

Take, for instance, Patricia Mince. She is a breast cancer survivor herself, and she has made it her life's mission to stamp the disease out. To achieve this, she is raising funds and raising awareness about the cancer and what can be done. To date, she has raised in excess of $100,000 to fund research and treatment. Furthermore, she is currently undergoing negotiations to have the breast cancer wall of remembrance to be erected in Oregon, where it will be more accessible.

Mince is a woman on a mission. Since her own diagnosis, and subsequent treatment and eventual remission, she has dedicated herself to helping other women and families going through the same ordeal, and to fighting this horrible disease. An influential woman, she has managed to rally the support of many others who have made donations, petitioned, and campaigned with her. That said, while she has managed to raise over $100,000 through this support, a very substantial amount of money, Patricia Mince is showing no signs of stopping.

Like one in eight other women in this country, Patricia Mince was diagnosed with invasive breast cancer. She survived her battle, but she knows like no other how devastating the illness can be. As a result of this, she is also campaigning for the 'Angelina Jolie effect'. The Hollywood star and human rights activist was tested for the BRCA1 and BRCA2 genes, known as the breast cancer genes, and decided to have a double mastectomy, after she tested positive.

When Jolie made the decision to be tested, and subsequently to have the mastectomy, she did so very publicly. She hoped, and Patricia Mince feels that she was successful in this, that it would encourage more women to take action. Indeed, in 2014, a Toronto hospital completed a retrospective study, which found that there was a 90% increase in the number of women who had BRCA1 and BRCA2 tests immediately after the announcement made by Angelina Jolie. As a result of this 'Angelina Jolie effect', there was also a 110% increase in women identified to be carriers of the two genes. Not all of these women decided to have an elective mastectomy though. All of them, however, had an increased awareness about the possibility of developing breast cancer later in life, meaning they are more likely to identify it earlier as well.

Patricia Mince wants to make sure that she will not be the next statistic in breast cancer. She will not let it take her down. Rather, she seems to become more determined on an almost daily basis to stamp this disease out. In fact, she is taking her fight straight to cancer itself, being proactive in her campaigning, rather than being only reactive in trying to find a cure. Naturally, finding a cure is equally important but her goal is to eradicate cancer before it takes any other victim.

As part of her campaign, Patricia Mince is currently talking with representatives of the Breast Cancer Survivors' Network. This network has developed the wall of remembrance, which honors every woman in the country who has lost their life to breast cancer. She has asked the network to have the wall moved to Oregon. If not, she would like to have a second wall created. The Breast Cancer Survivors' Network is spearheaded by Janet Beebe, one of Mince's personal inspirations.

Beebe is just 32 years old, yet she has survived two diagnoses of breast cancer. She started her first nonprofit organization in 1983, that focused on breast cancer. In 2006, she founded the Breast Cancer Survivors' Network, Inc, which is based in Peachtree City, GA. Janet Beebe, like Patricia Mince, is fully committed to eradicating breast cancer and to educate others on the need for breast self-exams, thereby encouraging early detection.

For Patricia Mince, Janet Beebe is a woman who has inspired others the world over, showing them that life with and after breast cancer is possible, and that it does not need to take anyone down. She feels that it is thanks to women like Beebe that so many other women now perform regular self-examinations. These examinations are perhaps even more important than genetic tests, mainly because they can be done anywhere, at any time, and because they are completely free, meaning anyone can do them.