Granddaughter of Gen Chennault visited the Victory Museum in Moscow to commemorate fallen soldiers and remembrance of World War II. 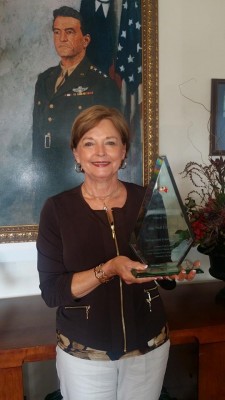 MOSCOW, May 11, 2018 (Newswire.com) - ​Nell Chennault Calloway of the Chennault Aviation & Military Museum was invited to speak in Moscow this week. Calloway is the granddaughter of Lieutenant General Claire Lee Chennault, the commander of the 1st American Volunteer Group or the Flying Tigers, a covert group of American airmen who helped fight against Japanese forces in China.

General Chennault’s volunteer squadrons of Navy, Marine, and Army servicemen were assisting the fledgling Chinese Air Force. Under the directive of FDR, the group trained Chinese pilots and ran missions across Burma and China even before America officially joined WWII.

The citizens of all countries need it not only as a reminder but a call to each one of us to put aside our differences for a bigger cause and make the world a better place for future generations.

For the 73rd anniversary of the end of World War 2, the Victory Museum in Moscow is opening a new exhibition space called “The Hall of Verity.” The Hall of Verity will present facts and documentary evidence about the most destructive war in modern history.

Preceding the entrance to the main exhibition hall, the new area will set the tone for visitors experiencing the museum’s presentation of World War II, known in Russia as “The Great Patriotic War.” Calloway is honored to be able to witness the unveiling, saying:

“As important as this exhibit is, even more important is the fact that the Russians are demonstrating that it was a collective effort from people of all allied countries.”

Calloway was personally invited to the Grand Opening Ceremony, an all-day event with parades, documentary films, and musical performances that culminated in a fireworks display over the museum. It is the organizers’ wish that Calloway’s presence as the representative of General Chennault and the Flying Tigers help preserve the mutual memory of the Second World War for both the United States and Russia.

As the director of the Chennault Aviation and Military Museum, Calloway understands the importance of documenting history for future generations. “By upholding the standards of factual documentation, we are educating the younger generations on leadership, heroism, dedication, and sacrifices that enable us to preserve our freedoms and generate the enduring commitments that make our nations great.”

The day following ceremony, Calloway also participated in the recognition of fallen Soviet soldiers honored in the “Immortal Regiment,” in March. This procession takes place not only in Moscow but around the world every year on May 9, the anniversary of Soviet victory over Nazi Germany.

Hundreds of thousands of people marched in Moscow, carrying portraits of loved ones and flowers to commemorate those lost in World War II. “This event will remind people of the heroes of WWII and the devastating sacrifices of so many people,” Calloway said to Russian media, “The citizens of all countries need it not only as a reminder but a call to each one of us to put aside our differences for a bigger cause and make the world a better place for future generations.”

Calloway has visited other Asian nations in memory of her grandfather. This was her first trip to Russia to honor the Flying Tigers. General Chennault used Russian military tactics when developing his strategy for the Chinese Air Force. Many Soviet pilots flew with the Chinese before the arrival of the Flying Tigers; Chennault studied their successes as well as the tactics and equipment of the Japanese forces.

The ‘dive-and-zoom’ technique Chennault emphasized was contrary to what American and British pilots had previously been taught. However, Chennault’s methods were justified when the Tigers first saw combat on Dec. 20, 1941. They destroyed 299 enemy aircraft and lost only 12 pilots. In combat, the Tigers were usually outnumbered at least ten to one but they were never defeated in battle.

Calloway has been invited to speak and participate in events around the globe that showcase everything from General Chennault’s accomplishments, to honoring the legacy and history of the Flying Tigers unit, to commemorating statues and memorials for the Tigers and for General Chennault himself.

In her journey to continue her grandfather’s fight for peace, Calloway has also been honored to meet many important dignitaries and politicians. She has met with former and current Chinese Ambassadors and the former Chinese Defense Minister.

Calloway has also been a guest of the former Taiwanese president who presented her with Gen Chennault’s Chinese medals. She’s traveled all over Asia and the US as well to honor her grandfather’s legacy and met with countless state and city officials, as well as former US President Jimmy Carter.

Calloway’s involvement with many international dignitaries has positioned her as a cultural ambassador for promoting a message of peace for all countries through the remembrance of World War II. She considers it her mission to improve relations between nations by emphasizing a shared history and recalling the spirit of international cooperation during the dark time of war in order to guide future generations to find peace.

Calloway draws inspiration from her grandfather when she travels across the world, remembering that it was his fondest hope that “the sign of the Flying Tiger will remain aloft just as long as it is needed and that it will always be remembered on both shores of the Pacific as the symbol of two great peoples working toward a common goal in war and peace.” 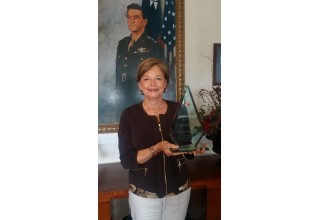 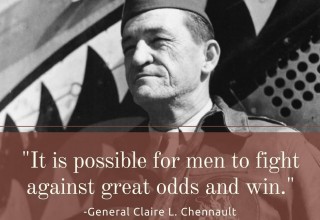