Flying Scotsman's US Appeal Ahead of Historic Centenary 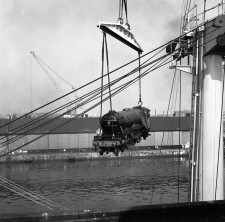 YORK, England, May 12, 2022 (Newswire.com) - The UK's National Railway Museum is seeking the help of rail fans across the United States to help celebrate the 100th birthday of one of the world's most recognizable steam locomotives - Flying Scotsman.

Built in Doncaster, England, in 1923, the engine became the first steam locomotive to officially reach 100 mph, capturing the hearts of people across the world.

Flying Scotsman turns 100 in 2023, and the locomotive's current owners, the National Railway Museum, have launched an appeal to find memories and stories of Flying Scotsman. These could feature as part of a new exhibition called Flying Scotsman: 100 Years, 100 Voices.

Charlotte Kingston, Head of Interpretation and Design at the National Railway Museum, said: "Often described as 'the people's engine,' we want to hear what Flying Scotsman means to you, and we particularly want to hear from people who have family memories of Flying Scotsman's famous trip to the United States. We hope that this exhibition will create a lasting and important chapter in the Flying Scotsman story."

Flying Scotsman famously visited the United States and Canada between 1969 and 1973 as part of a tour organized by British owner Alan Pegler. In 1969, Flying Scotsman was fitted with a cowcatcher, a bell and American-style whistle and set off from Boston along the eastern seaboard of the United States, visiting New York, Washington D.C., and ending in Houston, Texas.

The following year Flying Scotsman began another tour of U.S. towns and cities, which included Chicago and the National Railroad Museum at Green Bay, Wisconsin, before travelling to Canada and finishing at Niagara Falls on the Canadian/U.S. border.

The 1970 tour was beset by financial difficulties, and in a bid to balance the books, in 1971 Pegler arranged for the train to travel to Toronto and then San Francisco where it went on display at Fisherman's Wharf. The trip worked well operationally but was a financial disaster, and Alan Pegler was forced into bankruptcy, leaving Flying Scotsman stranded in the USA.

In 1973 Flying Scotsman was brought back to the UK after Sir William McAlpine arranged to pay creditors and to purchase the locomotive.

Flying Scotsman left the Doncaster workshops in February 1923 and was the first locomotive of the newly formed LNER (London and North Eastern Railway). Designed by Sir Nigel Gresley and numbered 1472, the locomotive was named 'Flying Scotsman' the following year when it was picked to attend the British Empire Exhibition in London and renumbered 4472.

To submit your memories of Flying Scotsman, visit: www.railwaymuseum.org.uk/flying-scotsman/your-moments-and-memories

For more information and to arrange interviews: 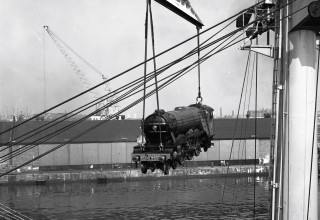 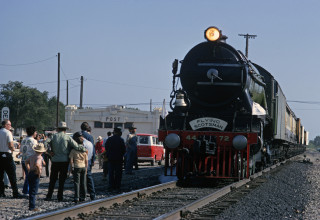 The home of iconic locomotives and an unrivalled collection of engineering brilliance.