The Big Sky Kid's Flight Camp is a week long pilot training camp held at Summit Aviation, Inc. in Bozeman, MT and was created to give young cancer survivors an experience of a lifetime, an experience these amazing individuals sorely deserve. The week includes one-on-one flight instruction that doubles as a first-class sightseeing tour of Montana with incredible views of Yellowstone National Park, the Grand Prismatic Spring, and the Grand Tetons. 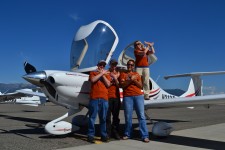 Belgrade, MT, July 11, 2016 (Newswire.com) - Nina Garkavi was vacationing with her family in Florida when she started experiencing piercing headaches. As a young professional in the high-paced world of marketing in New York City, she didn’t believe in slowing down. It was only to appease her mother that she went to get checked out at the hospital on what was supposed to be their last day in Florida. Age 22, she never expected the doctor to use the words “mass in your brain” or to tell her that she would have to cancel her flight back to New York. She was diagnosed with Medullablastoma desmoplastic, a pediatric brain tumor extremely rare in persons of her age, and scheduled for immediate surgery. She describes the period that followed as a “whirlwind” and “a reality check.” The tumor, and the multiple surgeries to remove it, left her with balance and coordination issues on the right side of her body. She had to re-learn how to write, teaching herself to be left-handed after a lifetime of right-handedness.

Lauren James was 16 when she was first diagnosed with Rhabdomysarcoma, a type of cancer that typically starts in the muscles. James’ cancer, however, wasn’t detected until she was already Stage 4 and the cancer had permeated her bones. She endured a grueling three and a half years of chemotherapy and a month of radiation. When she was going through her cancer treatment, she said, there were times when it was easy to dwell on things that she might never be able to do.

Nick Weese battled Hodgkins-Lymphoma while in high school. Sam Dean was diagnosed with Anaplastic Myxopapillary Ependymoma, a cancer of the spinal column, when he was just 11. The diagnosis stories ring all too familiar to far too many people. In a rare positive turn last summer, all four, now in remission, were selected from across the country to participate in the Big Sky Kid’s Flight Camp in Bozeman, Mont.

Nestled between the Bridger, Tobacco Root, and Spanish Peak mountain ranges in Southeast Montana, Bozeman is known for its stunning mountain views and high arching blue skies. It also happens to be the home to Summit Aviation, the award winning flight school and charter-service company who was hosting their second annual five-day camp for cancer survivors.

Big Sky Kid’s Flight Camp rose out of Summit Aviation owner Ben Walton’s dream of eight years. His desire to do something for those affected by cancer began after he lost his own sister-in-law to colon cancer. “She was only 32, so extremely young for a cancer like that. They didn’t even check for it… Watching someone go through that… it’s just really brutal.” During that trying time, Walton met the man behind First Descents, a kayaking camp for cancer survivors in Colorado. “I just thought that was very cool, and it got me thinking that I’d like to do something like that.”

It wasn’t until a couple years later, however, that Walton would experience the real catalyst for creating his Flight Camp. He still remembers where he was when he got the phone call about his mother’s diagnosis. “I was catching a flight to Philadelphia where I had to be at a conference for a week. It was… really tough,” he said, with a hesitation and an expression that said his words couldn’t even begin to describe it. After that, he called a focus group, bringing together members from both the aviation and cancer support communities, and said, “We have to do something.” He had been considering establishing a new non-profit to get the job done when Mary Peterson, the director of the existing Bozeman based non-profit Eagle Mount, suggested that they simply work together. Eagle Mount’s website describes their mission as providing “quality therapeutic recreational opportunities for people with disabilities and young people with cancer… so that “they shall mount up with wings as eagles.”” Walton recalls that Peterson said their collaboration was “meant to be,” and truly, Eagle Mount’s partnership with Summit would allow them to make good on that mission statement in a very real way.

The Big Sky Kid’s Flight Camp is a weeklong pilot training camp held at the Bozeman Yellowstone International Airport. The week includes one-on-one instruction with a Certified Flight Instructor, over 10 hours of flight time in Summit’s state-of-the-art Diamond aircraft, ground school courses covering topics like basic aerodynamics and cross-country flight planning, as well as behind the scenes tours of rarely seen areas like the traffic control tower and private hangars. It’s made possible only by private donations (Eagle Mount never accepts any government funding) and the donated time of Summit instructors. In fact, all 15 of the regular instructors at Summit volunteered their time. Walton ran an essay contest to choose just four. CFIs Randall Holliday, Justin Waugh, AJ Mitchell, and Phillip Levy were each paired with one of the survivors.

When Garkavi, James, Weese, and Dean arrived on Monday morning, their instructors wasted no time getting them in the aircraft. The Diamond, a plane described as “wanting to fly,” makes an excellent training plane, and the instructors handed control to the campers during their very first flight. Weese described it as “kinda scary” but then amended his statement to add, “I already battled cancer. I’m not afraid of anything.” That nerve-rattling moment when an instructor says, “Your plane,” is no different than the way any other student at Summit begins their instruction, but for the cancer survivors specifically, it provides an incredible dose of “I can do it!” confidence.  By Wednesday, they had mastered basic maneuvers and were performing their first unassisted takeoffs and landings.

Their in-air instruction doubled as a first-class sightseeing tour of Montana, flying over breathtaking sites like the snow-capped Bridger Mountains and the Natural Bridge Falls near Big Timber. The final day of training took the campers on a course to Driggs, Idaho for their first cross-country flight. They routed over Yellowstone National Park, where they saw the Grand Canyon of Yellowstone, the Grand Prismatic Spring (which apparently puts on an incredible display from above, showing off its full range of color) and the Grand Tetons. The group of students and instructors stopped for their final lunch at the Warbirds Café - located right on the tarmac of the Driggs-Reed Memorial Airport – where they celebrated their second birthday of the week. Dean turned 21 on Wednesday, and James celebrated 26 that Friday. Said James, “This is the best birthday I have ever had in my entire life. I couldn’t have asked for anything better – to fly over Yellowstone and fly with all of these amazing people. I am just eternally grateful to all the sponsors and to Justin and the other instructors. This is something that not a lot of people get to experience, and there is no way I could ever pay them back, or say thank you enough.”

Despite the celebration and the sight-seeing, Summit’s Chief Instructor, Janine Schwahn, felt it was important to clarify that this was not something that was just handed to the survivors. “They earned it,” she said, referring to their accomplishments throughout the week. “There are a lot of charities out there that give gifts to cancer survivors. That’s not what this is. They trained like anyone else. It normalizes them. Pilots don’t care about your past…. You’re a pilot right now. And it is still possible no matter what you’ve been through. I think that’s what this is about.”

She may be right, but it is also true that no one walked away from the camp the same as they went into it. Volunteer Instructor Holliday said that the personal rewards of the camp were “hard to describe,” but that the true highlight of the week was getting to know Weese, James, Dean & Garkavi. “They are all mature beyond their years,” he says, “and stronger than anyone could possibly imagine.”

Volunteer Instructor Waugh said that it was, “by far the best aviation experience” he’s had, and added, “I’m sure I learned more from her (Garkavi) than she did from me.” Walton says he has seen a new spark in all of the volunteers since the camp.

Survivor James described it simply as the best week of her life.

A few weeks after last summer’s camp, Garkavi, reminisced about her time at the flight camp, saying it was the first time that she was “thrilled” to be left handed. “The left seat of the plane requires using your left hand to control the joystick. Adapting to my new physical realities has been a constant struggle and has forced me to have patience, accepting many aspects of my new self. Flying over Montana gave me a new perspective, an entirely different angle: zoomed out and from above. I felt overwhelmingly alive and free. It reminded me that I could fly over every problem that comes my way. If I simply turn on the mindset, delicately balance the pedals to stay on track, slowly start pulling the joystick – I’m headed upward, flying over the clouds. The wind is always unpredictable and turbulence may occur, but nevertheless, it is possible to soar through it. Flight camp proved to me that challenges can lead to amazing experiences. Perhaps the last three years of learning to use my left hand made me a better pilot than I ever could have been. It’s been weeks since I was soaring above beautiful mountains, but in my mind, I am still flying high.”

Summit Aviation is gearing up to do it again this year, but they need help. The flight camp is funded 100% by volunteered time and financial donations to cover the cost of fuel, food, and other necessary items. If you would like to help provide this experience to a new group of young cancer survivors, you can donate by visiting our Generosity crowdfunding website https://igg.me/at/NLMuCJtrg-g or by contacting Summit Aviation at: (406) 388-8359 or clientcare@flysummit.net.

Summit Aviation, Inc. is a nationally recognized award-winning flight school, as well as the prevailing resource for on demand 135 charter and aircraft sales.