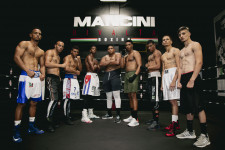 MIAMI, July 21, 2022 (Newswire.com) - Famed Florida boxing promoter Henry Rivalta has created Miami's best boxing card of the year. The Hall of Fame promoter will be hosting a professional boxing extravaganza that includes five title fights and the introduction of Team Freedom 2, once again bringing top-tier boxing to South Florida as he's done so many times in the past.

With the combat Industry continuing to grow at a rapid pace, combat sports has suffered recent criticism for its inability to relate to the general-market fight fan. Rivalta believes that this promotion fills the void Miami has been waiting for. Rivalta says changing the current landscape of boxing to honor the glory days of boxing will turn the general market into hardcore boxing fans.

The Sept. 23 event will feature five title fights in one night and the introduction of Team Freedom 2. Team Freedom 2 consists of six highly anticipated boxers from the island of Cuba who fled Communism in search of the American dream - they are the new school of boxing. September 23, the world can see the showcase of six future champions:

In action fighting for titles will be Miami's own JD "Pretty Boy" Martinez, 16-2, a fan favorite and crowd pleaser, as well as Jorge Romero, 22-0; Ryan "Blue Chip" Martin, 24-2; and two of Cuba's fast-rising stars, Frank Zaldivar, 3-0, and Victor Abreu, 1-0, both with decorated amateur careers and part of Team Freedom 2.

"I am very excited to showcase our fighters come Sept. 23," said Rivalta. "I want to thank Martin Mancini, Nick Alvarez and our team for all the work that has been done. Our vision is to change the lives of young men who sacrifice their own lives in the ring. Teaching them to put God first in all they do. These talents will be future world champions and we are very happy to help lead the way."

Follow us on social media for more information on tickets and VIP table sales: @rivaltaboxing on IG and @mancinirivaltafightclub on IG.