The U.S. Department of State estimates some 600,000 to 800,000 people, mostly women and children, are trafficked across national borders annually. Church of Scientology hosted a benefit to raise funds to help victims of modern-day slavery. 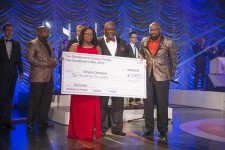 The second beneficiary was Mr. King’s mentoring organization, Gentlemen’s Course, which ​educates youth on the skills they need to survive in the business world—etiquette, attire and attitude—and includes the human rights curriculum of United for Human Rights.

Mr. King spoke of the urgent need to combat human trafficking. Florida receives a high percentage of the 17,500 to 20,000 victims trafficked into the U.S. annually. He pointed out that not only is human trafficking itself a violation of the United Nations Universal Declaration for Human Rights—article 4, No Slavery—it also robs the victim of their other rights.

There were also presentations by Angela Blaylock of Molina Healthcare and Florida State Representative Ross Spano, both of whom spoke of their work to fight modern-day slavery and encouraged others to accelerate their efforts against this abuse.

Those attending the fundraiser enjoyed R&B classics elegantly rendered by singer Joanne Edwards and the world-class hospitality of the Fort Harrison’s five-star kitchen.

Since its construction in 1927, the Fort Harrison has been home to many charitable events and community organizations. The Church of Scientology has hosted over 500 community events at the Fort Harrison since it’s top-to-bottom restoration in 2009. The Scientology religion was founded in 1954 by humanitarian and philosopher L. Ron Hubbard. It has since expanded to more than 11,000 churches, missions and affiliated groups in 167 nations. To learn more, visit www.Scientology.org.

Neighbors Welcome the Scientology Volunteer Ministers and Join the Campaign to Help Bogotá Stay Well
The Scientology Stay Well campaign assumes even greater importance in Colombia with the increase in new COVID-19 cases in the country.
Scientology - Jul 15, 2020