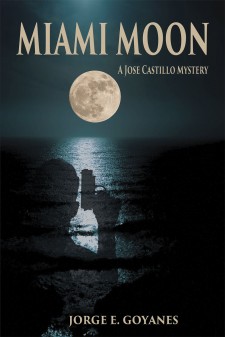 Miami, FL, April 5, 2017 (Newswire.com) - Jorge E. Goyanes, avid golfer, successful author, current events blogger, and business owner is excited about the release of his most recent book “Miami Moon: A Jose Castillo Mystery”: a phenomenal throwback to the age of gritty detective novels, with a distinct and unforgettable protagonist, who delivers another wild ride through the Miami underworld.

Published by Fulton Books, “Miami Moon” marks the return of private eye Jose Castillo, a Cuban-American raised in Miami reminiscent of the tough-talking sleuths from the pages of Elmore Leonard, Robert Parker and Raymond Chandler. Castillo made his first appearance in Goyanes’ debut novel, “Miami Beat”, about which Kirkus Reviews says: “it’s easy to admire the spirit and humor of the book.”

“Miami Moon” offers a fully-developed cast of characters, which includes the vibrant streets, sights, sounds, and smells of the Magic City itself. Also along for the ride are Castillo's buddy, ally, and tech genius, Jim Gafford, who keeps Jose up on the latest security and surveillance gadgets; and his best friend Nate Devine, a homicide detective with the Miami PD who spends much of his time trying to decide whether to thank Jose for his help or throw him in jail for interfering with an investigation. As in Goyanes' first book, “Miami Beat”, Castillo peeks under the hood of Miami's seedy underbelly in Miami Moon where he goes up against the Russian Mafia, a ruthless criminal, and a serial killer targeting sex workers on the streets of Miami.

Readers who wish to experience this delightfully gritty work can purchase “Miami Moon: A Jose Castillo Mystery” at bookstores everywhere, or online at the Apple iTunes store, Amazon, Google Play or Barnes and Noble.

Please direct all media inquiries to Gregory Reeves via telephone at 877-210-0816 or via email at gregory@fultonbooks.com or Ily Goyanes by telephone at 305-763-6689 or email at ily@kitandcubcreative.com.

Much like Jose Castillo, the wisecracking, fictional private eye from his Jose Castillo mystery series, Jorge Goyanes owns an auto repair shop, enjoys a good cigar and relies on common sense to carry him through life's twists and turns. When he isn't writing about Jose's latest adventure, successfully running his business, Car Clinic in West Palm Beach, Florida, or writing his political blog which can be found at sleepwalkingthrougtheuniverse.com, Goyanes can be found on the golf courses of Palm Beach County, menacing trees, windows, and the golfers in front of his group. His first book, “Miami Beat” was published in 2012 and his second Jose Castillo Mystery, “Miami Moon” was published in 2017. Goyanes is also a member of the Mystery Writers of America. Learn more about Jorge at jorgegoyanes.com.

John G. Pisarcik's New Book 'James is My Name' is a Great Tale About the Election of the Basilica's New Pope
Fulton Books - Jun 18, 2020

Joe 'The Gamer' Petraro's New Book 'The Pumpkin Man vs the Boogie Man' Shares an Amusing Children's Story About a Match to Chase Away the Boogie Man
Fulton Books - Jun 18, 2020