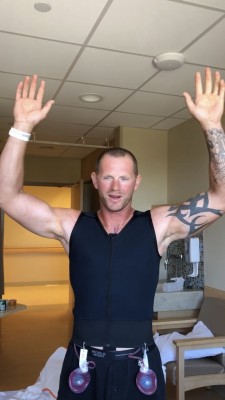 TINTON FALLS, N.J., October 5, 2018 (Newswire.com) - When people hear about breast cancer, they most often think of it as a woman's disease. Brian Thomson, a 34-year-old single father of two, reminds us that breast cancer does not always discriminate by gender.

Over the course of four years, Brian experienced rapid growth of painful breast tissue. Bloodwork, two sets of mammograms and ultrasounds did not lead his doctors to the cause for such rapid growth. Brian's breast tissue grew uninterrupted, measuring approximately 10 cm in diameter. It was then he made an appointment with Dr. Stephen Chagares, a board-certified breast surgeon and certified robotic surgeon based out of Monmouth County, New Jersey, who diagnosed Brian with bilateral breast masses.

Originally deciding on a bilateral lumpectomy, Brian changed course in order to forgo the visible scarring on the breasts that is associated with traditional lumpectomies and mastectomies. Brian preferred a bilateral robotic nipple-sparing mastectomy (RNSM).

"I discussed surgical options with Brian, which included needle biopsy or debulking surgery," says, Dr. Chagares. "Both options, however, would leave Brian with unknown breast tissue intact, which was concerning given his family history of cancer." Originally deciding on a bilateral lumpectomy, Brian changed course in order to forgo the visible scarring on the breasts that is associated with traditional lumpectomies and mastectomies. Brian preferred a bilateral robotic nipple-sparing mastectomy (RNSM).

On Sept. 28, Brian and Dr. Chagares made history with the first male bilateral robotic nipple-sparing mastectomy ever performed in the world.

With robotic assistance, Dr. Chagares removed all of Brian's breast tissue from both breasts through single incisions under the armpits, eliminating incisions and scarring on the breasts. Twelve hours after surgery, Brian had full range of shoulder motion and was discharged from the hospital with drains. Dr. Chagares is happy to report that Brian is doing very well in his first postoperative week. Dr. Chagares expects to remove his drains at the one-week postoperative appointment. Brian is also pain-free for the first time in four years. He looks forward to what the future holds for his family and wants other men with breast masses or breast cancer to push past embarrassment and seek the best care available.

Dr. Chagares was trained in Milan, Italy, by the pioneer of the robotic mastectomy technique, Dr. Antonio Toesca. Dr. Chagares is proud and honored to offer this surgery to his patients of any gender identity. Dr. Chagares and his patient, Brian Thomson, are available to interview should media outlets see fit to include this historical event in their publications.

Further information is located on drchagares.com and appointments can be made by calling his office in Tinton Falls, New Jersey, at (732) 450-9700. 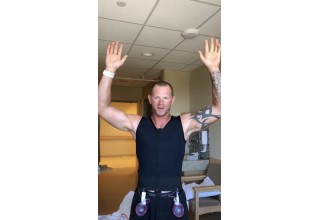 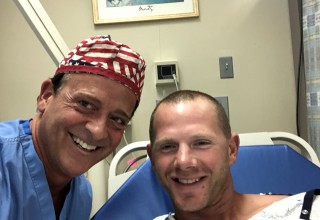 About Stephen A. Chagares, M.D.

Stephen A. Chagares, MD, FACS, is a board certified general, laparoscopic, robotic and breast surgeon.