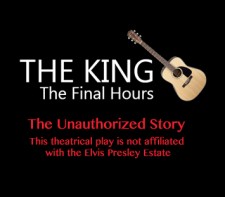 This person was born on Jan. 8, 1935 in Tupelo, Mississippi and died in Memphis, Tennessee on Aug. 16, 1977. During his lifetime, he became the voice and face of music for an entire generation. Today, he is referred to as the King.

This is not a biography of the King. This play will take viewers back in time to private moments that shaped his life. Like the first time he met Priscilla in Germany and fell in love with the 14-year-old girl. Viewers will also be transported to the MGM lot as the young movie star met Ann-Margret for the first time on the set of Viva Las Vegas.

This crowdfunding campaign will raise money to bring his spirit alive in an off-Broadway theater production that is scheduled to run in New York City in October 2018. The NYC theater company and nonprofit, Artistic New Directions, is also supporting the play’s development.

The theatrical play, The King, The Final Hours, is an artistic interpretation that reflects on the singer’s life, his love and his failures. The audience will experience his private conversations that likely took place as he faced his final hours on earth.

The theatrical play is not affiliated with or endorsed by Elvis Presley Enterprises.

The initial readings of Act One and Act Two have been well received by theater lovers and the media. Earlier this month, the New York Post published a story on The King, The Final Hours, saying it “had a well-received reading of its second act in Midtown.”

“Most people know his name, but few people know his story and the inner conflict the King faced in life,” said Mark Macias, the playwright behind the production. “This is not a biography of the King. This play will take viewers back in time to private moments that shaped his life. Like the first time he met Priscilla in Germany and fell in love with the 14-year-old girl. Viewers will also be transported to the MGM lot as the young movie star met Ann-Margret for the first time on the set of Viva Las Vegas.”

Few historians have explored the inner conflict the King faced from being in love with two women – Priscilla and Ann-Margret – at the same time. This play takes a deeper look at what the King likely felt as he was forced to choose between these two women: one was a safe love, while the other was a risk.

The playwright behind The King, The Final Hours has a distinguished career in storytelling and TV production. Macias is a former Executive Producer with NBC and Senior Producer with CBS in New York. His TV peers have recognized his storytelling with five Emmy nominations and one Emmy at both NBC and CBS. He is a published author and columnist with CNBC and The Daily Caller.

Pictogram Productions LLC is turning to fans of the King, theater and music lovers, and investors who want to become a part of the play’s production.

Donors who help fund The King, The Final Hours will be given several gifts for their generosity, including private invitations to the opening night cast party, limited edition vintage T-shirts, autographed posters and autographed scripts of the actual play.

The crowdfunding campaign is also giving away items that money can’t buy – like a walk-on role in the play and a co-producer credit.

“Here’s an opportunity to appear in an off-Broadway musical even if you have no musical talent. For a donation of $100, we are giving away a limited number of walk-on roles in this play,” said Macias. “You can also become a co-producer of this show and take part in its success. If The King, The Final Hours goes on to win a Tony Award, you can tell all your friends you are a Tony Award-winning co-producer of the play.”

The money from this crowdfunding campaign will fund a 2-week limited preview run that finances the theater, actors and everyone else involved in the production. This 2-week run will introduce the King’s story to the larger theater community that typically finances major Broadway productions. This includes exposure to producers, investors and fans of the King.

People who are interested in donating to bringing the King alive can donate on the Indiegogo crowdfunding platform.