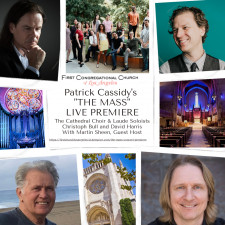 LOS ANGELES, March 10, 2022 (Newswire.com) - Los Angeles's First Congregational Church marks the return of their Great Works on The Great Organs series with the concert premiere of Irish composer Patrick Cassidy's The Mass, a new setting of the Latin Mass for choir and organ. The performance, which will take place at First Church on March 19, 2021, also celebrates the recent album of The Mass, released on November 8, 2021. This concert is presented in partnership with IrelandWeek, and The Resonance Collective.

Cassidy's The Mass, the first-ever symphonic Latin Mass setting from an Irish composer, draws equally on the composer's Irish roots as on his vast experience in both classical and film music. By reimagining the traditional Catholic Mass text through the lens of its universality, Cassidy and his collaborators put forward a human response to one of the most trying periods in our collective memory.

"While writing The Mass I was aware that this would be the first setting of the Catholic Latin Mass by an Irish composer — it was a labor of love with no expectations," said Patrick Cassidy. "I am elated that The Mass has found a home at First Church with its inclusive philosophy."

Noted actor and special guest Martin Sheen will host the live premiere, lending his powerful voice to The Mass's narrations. Laude, First Church's professional chamber ensemble who recorded the album, will serve as soloists and sing with FCCLA's Cathedral Choir. First Church Music and Arts Director David Harris will conduct, and Organist-in-Residence Christoph Bull will accompany on The Great Organs of First Church. The Great Organs were a collaboration among five organ-builders, and comprise the second-largest church organ in the world, with 18,094 pipes, 328 ranks, and 275 stops. Its ethereal symphonic colors make The Great Organs an essential partner in this collaborative premiere.

"Ever Since I was a teenage altar boy, I developed a deep love for the Latin Mass. I had a visceral response when I listened to the premier recording of Patrick Cassidy's magnificent composition of the Latin Mass, and accepted without hesitation his offer to serve as host and narrator for this first public presentation with the original Organ and Choir at First Congregational Church of Los Angeles. It is my hope that this historic work will become a fixture, to be newly remembered and performed by future generations to inspire and challenge, and to serve as a powerful source of spiritual nourishment." - Martin Sheen

Housed in Los Angeles's oldest Protestant Cathedral, FCCLA is home to a progressive and inclusive interfaith community, with a diverse offering of high quality performances and concert series. Their concert season continues with the monthly Golden Thread from the Resonance Collective and a robust Easter week series; for info/tickets, visit: https://firstchurchlosangeles.ticketspice.com/the-mass-concert-premiere