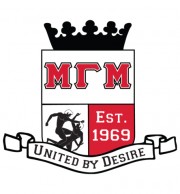 Progress in gay rights, same-sex marriage, and equality are the inspiration for Wesley’s brand.  The landscape of the gay community has evolved but with a growing detachment from the past.  1969, the year of the Stonewall riots, was a pivotal time in the gay rights movement and Wesley takes pride in acknowledging that history.

"Acknowledging and celebrating our past is the key to our survival. Losing a sense of pride in our society is a growing trend but I hope with my efforts gay men and the LGBTQ community will unite and take pride in our history."

Gay pride apparel hasn’t evolved since the Rainbow Flag made its first appearance in the San Francisco Gay and Lesbian Freedom Day Parade in 1978.  The pride colors and the flag will always be a part of the gay community but often those colors are only shown or worn once a year, during pride months.

Brand Management for Indie Artists & Small Businesses, specializing in LGBT Artists and Businesses. BlackOutEndeavors LLC is a multifaceted brand management company formed in 2007 and based in Harlem, New York City.