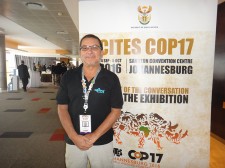 Colorado Springs, CO, January 25, 2017 (Newswire.com) - ​​​​​The Colorado based non-profit Fins Attached Marine Research and Conservation (Fins Attached), announces a new partnership with renowned Costa Rican biologist Randall Arauz. Over the next three years, Arauz will consult with Fins Attached as their International Policy and Development Specialist in an effort to install science based marine conservation and management policy in the Eastern Pacific, and to procure further protection for highly migratory marine species under international treaties.

“We are excited that we can now count on Randall’s expertise to advance our marine conservation and management agenda,” said Alex Antoniou, Executive Director of Fins Attached.  “We have focused strongly on generating science on highly migratory sharks, and Randall is the right person to help turn this science into policy, not an easy task when dealing with the powerful global interests of the shark fin industry.”

“Fins Attached has been helping researchers in the Eastern Pacific advance shark science for over 15 years, facilitating studies ranging from white sharks at Guadalupe Island, Mexico, to hammerhead sharks in Cocos Island, Costa Rica, and Galapagos, Ecuador,” said Randall Arauz.  “We must now use every tool available (public awareness, political lobby, exposure in scientific forums, litigation) for emerging marine conservation and management policy to be based on this science.”

Randall Arauz has a strong track record of impacts on marine conservation policy on a domestic, regional, and global scale.  Through PRETOMA, an NGO he established in 1997, he worked extensively studying sea turtle and shark interactions with fisheries, as well as their migratory movements, and forced important fishery policy change through strategic legal action.

He has served as an official Costa Rican delegate providing his expert advice at meetings such as the United Nations Consultative Process on the Law of the Sea (2004), the Convention on Migratory Species (2007) and the Convention on International Trade in Endangered Species of Wild Fauna and Flora (2013).  His work has been acknowledged by Conservation International´s Neotropical Conservation Award (2004), the Whitley Fund for Nature´s Gold Award (2004), the Goldman Prize (2010), and the Gothenburg Award for Sustainable Development (2010).  He is currently a PEW Fellow in Marine Conservation.

Fins Attached conducts research, promotes conservation and provides education for the protection of marine ecosystems.  Fins Attached believes in the preservation of our world's precious resources and that through the protection of the ocean's apex predators marine ecosystem balance can be maintained for the benefit of all living things on earth. Fins Attached is a 501(c)(3) non-profit organization. Visit www.finsattached.org, or email info@finsattached.org.