Final Robin Williams Film to Be Released in U.S. 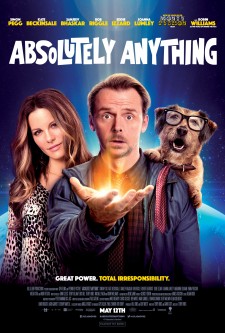 Absolutely Anything centers on a disillusioned school teacher, Neil, who suddenly finds he has the ability to do anything he wishes — a power bestowed upon him by a distant alien race. Unbeknownst to Neil, how he employs his newfound powers will dictate the fate of mankind — one wrong move and the aliens will destroy Earth.

"The talent in the film is exceptional, and we're certain many Robin Williams fans are anxious to see his final performance."

“It’s a great honor for us to have the opportunity to distribute Absolutely Anything in the United States,” said Atlas Distribution President Harmon Kaslow, “The talent in the film is exceptional, and we’re certain many Robin Williams fans are anxious to see his final performance.”

Absolutely Anything was originally released in the UK in 2015, but is only now being released in the United States. The film stars Simon Pegg (Shaun of the Dead, Star Trek), Robin Williams (Good Will Hunting, Mrs. Doubtfire) and Kate Beckinsale (Underworld film series), and was written and directed by Terry Jones (Monty Python and the Holy Grail, Life of Brian, Labyrinth).

Absolutely Anything is set for limited release on May 12, 2017. For more information, visit https://www.AbsolutelyAnythingMovie.com. The trailer for the film can be viewed on YouTube, https://youtu.be/ODcycOZlAP0.

The deal was brokered for GFM by Partner Fred Hedman and for Atlas by President Harmon Kaslow. The film was produced by Bill Jones and Ben Timlett. Mike Medavoy and Chris Chesser were executive producers.