charleybowers.com announces two lines of curious curios from forgotten film animator to delight film historians, archivists, and fans of his whimsical work in time for the holidays 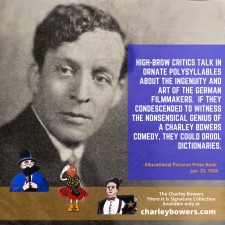 WHEATON, Ill., December 4, 2019 (Newswire.com) - Inspired by the quirky, surrealistic films of 1920s stop-motion animator Charley Bowers, designers Antonia Carey and Nick Palazzo are releasing the brand new “There It Is” Signature and Holiday collections. Named after Bowers’ most beloved film, Carey and Palazzo designed two collections of commemorative curios to honor the work of this pioneer of the peculiar so that die-hard fans of Bowers’ work can enjoy these rare, one-of-a-kind keepsakes. Both collections are scheduled to launch on Friday, Dec. 6, 2019.

This creative couple was inspired by their Mom (Angie’s) legacy. When Angie faced an early retirement, she confessed she wouldn’t be able to buy them “nice” presents for Christmas. Antonia said, “I told our Mom, it’s OK. You are our present. And besides, they don’t make what I’d really like.” Angie asked her daughter what it was. “A MacGregor model. That would be cool!” Unbeknownst to the couple and armed only with a blurry VHS tape on the ‘pause’ setting, Angie set about handmaking a MacGregor doll from scratch and surprised them that Christmas.

And from those humble beginnings, Angie went on to create numerous dolls from their favorite obscure films as Christmas presents. In that spirit, and now for the first time, charleybowers.com has created an entire product line of pins, ornaments, watches, tote bags, coin purses and scarves. The “There It Is” Signature Line features images from Bowers’ most beloved surrealistic film on scarves, timepieces, vegan leather tote bags, coin purses and hand-inked/finished, hard enamel collectible pin sets perfect for lapels or backpacks of any early film fan. The “There It Is” Holiday Collection features Hanukkah and Christmas images on porcelain ornaments to adorn a Hanukkah Bush or Christmas Tree.

Carey and Palazzo are excited to release these new product lines that they’re confident will fill a long-overdue gap for fans of Charley Bowers. Nick said, “There’s a real cult fan base out there for his work, and we want to offer his fans the chance to purchase products as quirky as Charley Bowers himself.” In honor of Bowers’ legacy, their website debuted on the 73rd anniversary of the death of this unrecognized genius of stop-motion animation. Given the George Eastman Museum originally restored Bowers’ film There It Is, Carey and Palazzo are paying those efforts forward by donating 10% of profits from the There It Is Collections back to the Museum to support their continuing work in film preservation.