An MMA spectacular comes to Pula Arena in Croatia. 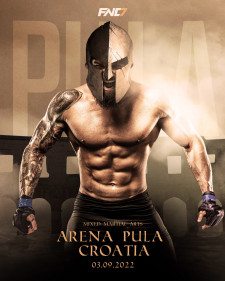 PULA, Croatia, July 28, 2022 (Newswire.com) - It's been more than 2,000 years since warriors fought for their lives inside such a hallowed monument. But on Saturday, Sept. 3, a new generation of gladiators takes center stage at one of six surviving Roman amphitheaters on the planet.

Fight Nation Championship presents an evening of mixed martial arts at storied Pula Arena that's destined to go down in MMA history. Six prior pay-per-view promotions and eight events connected to FNC's "Armagedon" MMA league, all staged throughout Croatia, have paved the way for this unprecedented showcase inside an ancient structure built between 27 BC and AD 68.

The fastest-growing MMA organization in Europe promises a dynamic card of full-contact fighting at FNC 7—including three title contests in the same night.

The heavyweight crown will be on the line when Brazilian Gerônimo dos Santos (44-23-1) steps into the octagon against Ivan Vitasović (10-5-1), the top-ranked heavyweight in the Adriatic region who fights out of Pula. Another fighter out of Pula, Daniel Bazant (6-3-0), will battle Brazilian Iuri Alcântara (36-10-0) for the featherweight title. And a pair of undefeated Croatians, Dani Barbir (4-0-0) and Andi Vrtacic (2-0-0), will square off for the middleweight crown.

Stay tuned to FNC.TV, the official streaming channel of Fight Nation Championship, for pay-per-view details about an evening unlike any in FNC history. Click here for a sneak preview of what's to come on Sept. 3.

Since its launch in 2019, Fight Nation Championship has exploded across the Adriatic region, becoming the fastest-growing mixed martial arts organization in all of Europe. Based in Zagreb, Croatia, FNC boasts a multimedia platform that includes its own streaming channel (FNC.TV) as well as social media engagement across YouTube, Facebook and Instagram. Recent FNC events have set regional records, drawing more than a half-million live views—and combined social media views in excess of 5 million.

Fight Nation Championship has exploded across the Adriatic region, becoming the fastest-growing mixed martial arts organization in all of Europe. Based in Zagreb, Croatia.