The #tooprettymovement is giving girls and women a chance to express themselves and feel empowered. We are in an era of female empowerment and Too Pretty is at the forefront. A brand that encourages girls and women to step outside of their "box" and do whatever they want to do. You are Never Too Pretty to do anything! 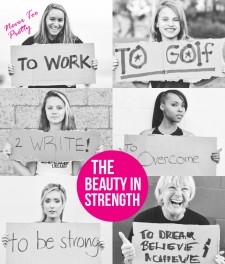 A few of the #tooprettymovement supporters are listed below:

The Too Pretty brand was created out of a woman’s experience in a male dominated sport: Boxing. As a fighter, I was told often that I was Too Pretty to be a boxer. Which really meant in their mind, that I was not capable. Those same people who then saw me fight would say, "You fight like a boy!" And in the world of boxing or any sport where you get punched in the face; that is a compliment. Fast forward 5 years and it dawned on me that she was not the only girl/woman experiencing these comments. There were business owners, surfers, managers, race car drivers, writers, bodybuilders and the list goes on! I launched the Too Pretty brand in late 2015 with a few lines of T-shirts and halter tops. They were a hit (no pun intended)! The social media platforms started to grow and the #tooprettymovement began.

So what do I know about fashion? Put it this way, in high school I would raid my dad’s closet and cut up clothes that didn’t fit me anymore to put together unique outfits. When asked at school by all the girls, “where did you get that” I would respond, “I made it”

While in college I would regularly go to concerts, but stay on the outside since I couldn’t afford tickets. After seeing the crowds at the Grateful Dead concerts I decided to make some bandana halter tops. For each top I would spend $1 and then sell them for $10 each.

An entrepreneurial fashionista was born!

Currently this movement is in full effect with an Instagram project. Girls and women are posting a black and white photo of themselves holding a cardboard sign on which they have written what they are Never Too Pretty to do. They use hash tags #nevertoopretty #tooprettymovement and #thebeautyinstrength and explain what it means to them.

Project #thebeautyinstrength is a short version book that features 6 girls and women who have been extraordinary in what they do and inspiring to other girls and women. They have been in male dominated sports, activities or jobs. This short version of The Beauty in Strength book is available on our Kickstarter to all backers. We will be looking for 10 more gals to feature in the long version of the book to be published later in the year.

Too Pretty Founder talking about how the brand started

Brand created by a woman for girls and women. The Never Too Pretty mantra creates an empowering message. To be strong without sacrificing ones femininity.

Olympic Athletes Are Joining Powerful Movement for Girls and Women
The #NEVERTOOPRETTY Movement has been catching the attention of female athletes in the Olympics! Mikaela Mayer, a boxer in the 2016 Olympics and Debbie Meyer, a swimmer in the 1968 Olympics have joined the movement! This movement created by the brand Too Pretty allows girls and women to post a photo of themselves holding a sign that says what they are Never Too Pretty to do or be along with their story.
Too Pretty - Jul 21, 2016
Newswire