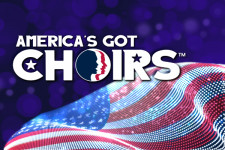 High school choirs from across the country are invited to upload a song performance recorded during the 2020-2021 academic year. The contest is free to enter, and submissions must be received on or before October 8, 2021.

A panel of leading choral experts will evaluate the entries and shortlist the Top 10 choirs that will take part in America's Got Choirs Virtual Grand Finale event on October 24, 2021, at 8pm EDT / 5pm PDT, when winners will be revealed.

"2020 was a year that tested the mettle of every student in America. And those students involved in the performing arts were challenged to unleash their ingenuity and creativity like never before." said Dr. Charlene Archibeque, one of America's foremost choral conductors and teachers, and a judge on the esteemed panel of judges for the competition. "I'm thrilled to see this competition in the virtual medium and I'm incredibly excited to see the diversity of performances."

The winning high school will receive a $2,500 cash prize along with the America's Got Choirs 2021 Award. Category winners in the following areas will each receive $500: Best creative visuals, best soloist, and best audio/video engineering. All entrants will receive 2 free tickets to the October 24, 2021 finale, and access to the FeelitLIVE platform, including a landing page for their choir, and a virtual venue to host one event for free through December 31, 2021.

To learn more and join the competition visit:  https://feelit.live/Americas-Got-Choirs

FeelitLIVE is a versatile, virtual and hybrid events platform connecting creators and audiences around the world. No matter your industry, event type, or audience size - FeelitLIVE gives you the tools to host and deliver the experience you have always imagined. FeelitLIVE is headquartered in Menlo Park, CA, with talented team members on four continents.