FARC Thanks ​Gurudev ​Sri Sri ​Ravi Shankar ​As It ​Relaunches as a Political Party, Calls It a Miracle​

WASHINGTON, September 5, 2017 (Newswire.com) - "We will show that we will fulfill the promise we made to Sri Sri to follow the Gandhian principle of non-violence," said a former FARC commander.

Even as the FARC, the guerrilla group that was spearheading the world's longest armed conflict until last year, officially turned itself into a political party with a new name and logo , its leaders have once again highlighted the role played by the founder of The Art of Living, Gurudev Sri Sri Ravi Shankar in this historic transition.

At an event last week held at the main square of Bogota attended by thousands of people, Timoleón Jimenez alias Timochenko, former commander in chief of the former rebel group, formally announced that the Armed Revolutionary Forces of Colombia will now be a political party under the name Alternative Revolutionary Force of the Common.

As the transition to politics and peace in Colombia by the FARC, for which the President Santos was awarded a Nobel Peace Prize, became formal, the former guerrilla leaders couldn’t hide their gratitude.

“Meeting Sri Sri and the Art of Living was truly a miracle. We will show that we will fulfill the promise we made to him to follow the Gandhian principle of non-violence,” a former commander, now political leader, declared. “We are very grateful for the support given by Sri Sri Ravi Shankar and the Art of Living to achieve peace and reconciliation. It was very important to us,” he added.

Gurudev Sri Sri Ravi Shankar, who was invited to the event, had sent Swami Paramtej to represent Art of Living in the Congress.

Addressing the delegates and conveying Gurudev’s blessings, Swami Paramtej said, “Transition is not an easy thing for anybody; it brings a lot of changes and we have to be mentally ready for it. With peace of mind, any objective can be achieved. Sri Sri Ravi Shankar sends his blessings to all of you.” Former FARC commanders Ivan Marquez, Rodrigo Londono and Pablo Catatumbo were among the leaders who interacted with Swami Paramtej.

The Art of Living is facilitating reconciliation meetings between the victims and the FARC group as part of the post-conflict process in Colombia. Its work is being hailed as a very important step toward consolidating the historic peace process in Latin America. 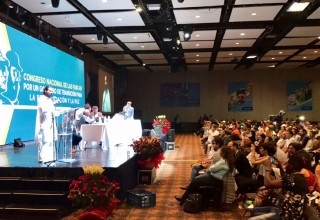 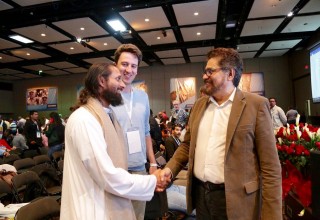 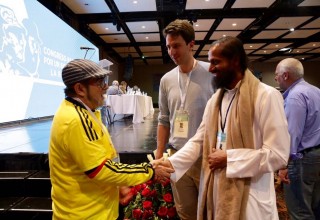 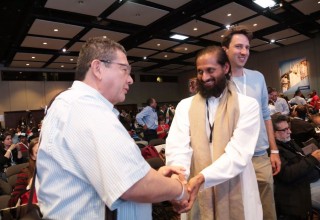 Founder of Art of Living, Sri Sri Ravi Shankar Calls on Colombians to Give Peace Another Chance
Sri Sri urges the Government of Colombia and FARC leaders to continue on the path of dialogue and avoid violence
Art of Living - Sep 2, 2019