Family of Murdered Soldier Has New Hope for His Purple Heart 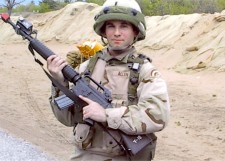 Allen and his commanding officer Captain Phillip Esposito were killed in Iraq on June 8, 2005. Staff Sergeant Alberto Martinez was arrested, tried and acquitted for the murders in spite of submitting a guilty plea.

Lt. General John Vines, former commander of the U.S. Army's XVIII Airborne Corps and Multi-National Corps – Iraq and Convening Authority for the court-martial, ordered the plea to be rejected. The families were never informed of the guilty plea. The acquittal is something the families cannot overturn, but the classification of Allen’s death as Non-Hostile, rendering him ineligible for the Purple Heart, is something his family has been fighting for over a decade.

The military has determined these deaths are Non-Hostile. “I strongly disagree with this classification and have been working for years to present this argument in person,” says Barbara Allen.

The two women have spent years petitioning the military to reclassify the deaths as Hostile. “Not only do we believe this accurately reflects the manner of their deaths,” says Sandstrom, “it is what is required to give my brother the appropriate honor he deserves and the legacy his four sons are entitled to see for their father.”

Now, after years of effort, the women have enlisted the support of a high ranking member of the government who is bringing this fight directly to the Pentagon and has told the women he is determined to see Lt. Allen posthumously awarded the Purple Heart. Today, the Pentagon received a binder of supporting evidence and arguments to reclassify Allen and Esposito’s deaths as Hostile.

“All we can do now is wait and pray – again,” says Allen’s widow Barbara. “It’s not our first rodeo, but I hope it’s the last time we are done being trampled on and this time, Lou receives his Purple Heart.” Barbara Allen issued this release through American Snippets, the media company she co-founded.