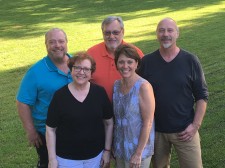 St. Louis, Missouri, January 18, 2017 (Newswire.com) - ​It's not every day that five adult siblings can pull together their collective skills and talents to produce a moving tribute to World War II veterans and their families. BookWise Publishing announces that the Miller Family did just that in this captivating compilation of memories collected from over 140 families of the men and women who lived and sacrificed during the Second World war.

Arrange for an insightful and intriguing interview with the Miller siblings; an artist, editor, businessman, writer/voice professional, and communications professor who pooled their strengths and passion for history to produce a full color, 338-page book to treasure, SOLDIERS' STORIES: A Collection of WWII Memoirs. Seventy-two years after World War II ended, this family found a way to preserve poignant and remarkable stories that are fading with time.

AWESOME READ! This is an amazing book! The history lessons, real-life accounts of miracles and hardships, and connectedness of veterans and their families make this book a must read and share. It is not only a celebration of service and sacrifice but an engagement of pride and honor. I found myself looking for the next volume as soon as I finished reading this collection. There is so much to learn and to feel with the combination of words and pictures. I highly recommend Soldier' Stories for families, schools and community groups.

Combine three movies … We're the Millers, National Lampoon's European Vacation, and Band of Brothers and you get the picture! On a shoestring budget and traveling across Europe in a motorhome for ten days in full comedic style, the Miller siblings followed their father's footsteps through WWII while discovering many stories that needed to be preserved for the next generation. The news? They survived the trip, and each other, to produce a fantastic book that is being tagged as a "masterpiece" and "brilliant" from readers around the world!

Now available through many online book retailers, this page-turner represents a different kind of history book, one told, not by historians, but by the families of the veterans of World War II. Beautifully illustrated, #soldiersstoriesbook shares short WWII stories, drawings, and photographs from the Pacific Theater, European Theater, and the United States.

Myra Miller, Ken Miller, Del Miller, Marshall Miller, and Lynette Miller Ballard are the five adult children of Myron H. Miller, S/Sgt who served in the United States Armed Forces from 1942-1946 during WWII in the European Theater Operation. Growing up in the small, rural community of Dixon, Missouri, the children of Myron and Dolores Gates Miller went off to college and lived their lives until, decades later, found themselves together again on a road of discovery concerning their father's war. During that process, they knew that there were not enough stories about their own father to fill an entire book and realized that other families might have stories and photos to share. Thus, the idea for Soldiers' Stories: A Collection of WWII Memoirs was born in February 2016. Through one crazy trip, hard work, and combined efforts, the book was published in December 2016.

About The Miller Family

The Miller Family has pooled their talents and skills to produce a compilation of World War II memoirs.