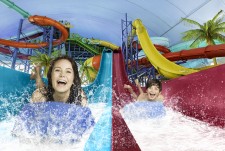 A family favorite, the Fallsview Indoor Waterpark in Niagara Falls, ON has won TripAdvisor’s 2016 Traveler’s Choice Award and is ranked number five on their list of Top Ten Amusement Parks and Water Parks in Canada.

“We are thrilled to be recognized once again with TripAdvisor’s Traveler’s Choice Award for the fourth year in a row as guest feedback and reviews are what help us to create one-of-a-kind waterpark experiences for people of all ages. …”says Sarah Vazquez, Vice President of Business Development and Marketing at Falls Avenue Resort.

It is also connected to the 20-acre Falls Avenue Resort which features some of the city’s best dining, entertainment, and hotel destinations such as the Sheraton on the Falls, Crowne Plaza Niagara Falls-Fallsview, Niagara Brewing Company, Hershey’s Chocolate World Niagara Falls, Hard Rock Café Niagara Falls, and much more.

Top 5 Reasons to Visit Niagara Falls This Summer
Second to none! Our 20 acre Resort is situated directly across from Niagara Falls and steps from Hornblower Niagara Cruises. The Resort is also home to Casino Niagara, and a short drive to award winning wineries and golf courses.
Canadian Niagara Hotels - Jun 22, 2016
Newswire