Extending Help to a Village of Hope—Puerto Esperanza 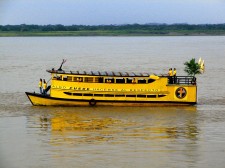 Puerto Esperanza, Colombia, July 21, 2016 (Newswire.com) - On the banks of the Amazon River in Colombia in the village of Puerto Esperanza (Port of Hope), a bright yellow tent is attracting a lot of attention and visitors.

The village curaca—the leader of the indigenous people of the region—invited everyone to attend the opening ceremony, where he welcomed the Volunteer Ministers to his community. He was joined by the director of Civil Defense of Nariño—the westernmost department or state of the country—and a local Christian pastor who gave the invocation.

The Scientology Volunteer Ministers Goodwill Tour has by plying the Amazon for the past decade, bringing practical help to those living in villages and working with public officials, educators, civil defense and religious leaders to assist them to deal with the needs of those they serve.

It is a broad initiative bringing effective physical and spiritual assistance to anyone, anywhere. Since its inception, hundreds of thousands have been trained in a wide range of skills that use Scientology fundamentals to alleviate physical, mental or spiritual suffering and improve any aspect of life—from communication and study to marriage and raising children.

The training is open to anyone who desires to help others and empower them to overcome difficulties and change conditions for the better.

Whether serving in their communities or on the other side of the world, the motto of the Scientology Volunteer Minister is “Something can be done about it.” The program, created in the mid 1970s by L. Ron Hubbard and sponsored by the Church of Scientology International as a religious social service, constitutes one of the world’s largest international independent relief forces.