EV and Hybrid Vehicles Hit a Bump in the Road

Start.io audiences show a declining trend in hybrid and electric vehicles (EV) audience segment in early May 2022. Is that a sign of a shifting trend or just a bump in the road? 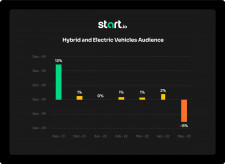 NEW YORK, June 7, 2022 (Newswire.com) - Consumers have shown a rising interest in and demand for hybrid and electric-powered vehicles (EVs) in recent years. Factors such as concern about climate change and the impact of fossil fuel-based gasoline, coupled with increased affordability and innovation, have all contributed to changing consumer mindsets. More recently, many countries are cutting down or boycotting Russian-sourced oil shipments due to Russia's invasion of Ukraine, triggering sky-high gas prices and making hybrids and EVs more appealing. However, despite these converging factors, Start.io's data shows global audience interest in hybrid and EVs, which once enjoyed constant growth, is shifting into a negative trend in May.

The hybrid and electric-powered vehicles market segment reflects a small share of the overall car market. Typical buyers were highly educated professionals and families with an upper-middle-class or higher income and a lifestyle that prioritizes choices that reduce carbon footprints. However, the influx of alternative vehicles produced by leading car manufacturers has made these more accessible, broadening the consumer audience. As a result, media coverage expanded and interest spiked, but there is evidence of a change this May, which shows a declining trend in the segment after a couple of months of stagnation.

Tesla is one of the most recognized EV brands and promotes itself as a more luxurious brand. As of today, the average Tesla customer profile hasn't changed much. The median age of a Tesla owner is 54 years old, and buyers tend to be mainly professionals, executives, senior managers, or hold other high-income positions. While the customer base is predominately male, females show increasing interest in the company's vehicles. Tesla's target demographic is largely established families with younger children or teenagers. A zoomed-in view of Tesla's growth rate of cars delivered worldwide shows a similar trend, moving from a drop of -21% in Q1 2020 to a slight bump of +2% in Q1 2021 and +28% in Q4 2021, and 0% in Q1 2022.

We believe that the downward trend spotted in the EV market could be related to several issues. The pandemic, which took hold of the world in Q1 2020, is a serious contributing factor. Between numerous factory shutdowns, issues with sourcing technology and chips, and supply chain disruptions, manufacturing was sent into a tailspin. Consumers also panicked, and spending on new vehicles plummeted as the supply was stunted. By Q4 2021, the pandemic was largely under control, and the industry was on its way to recovering. The backslide in Q1 2022 may be due to ongoing chip and shipping issues. What has caused the dramatic decline in May 2022 has yet to be pinpointed, but many industry insiders point to increasing inflation and a possible upcoming recession.

"Companies must have a deep understanding of audience intent, which is key for both short and long-term business strategies. Accurate segmentation and available audience analysis impact not only marketing and sales, but also product roadmap and demand forecasting," said Gil Dudkiewicz, Co-Founder and CEO of Start.io. "Businesses making decisions on old, inaccurate data could derail their profits for years to come, further highlighting the need to continually access and analyze real-time data before making strategic plans."

About Start.io: Start.io is a mobile marketing and audience platform that is reinventing mobile marketing by leveraging the largest independent app distribution. Start.io's direct integration with over 500K monthly active apps provides access to unprecedented levels of global first-party data, which can be leveraged to understand and predict behaviors, identify new opportunities and fuel growth.

Marketers Face Several Challenges in the Mobile Advertising Ecosystem, and AI is the Solution
A key challenge for the effective use of DSPs is lack of in-depth analytics knowledge among marketers. Start.io's Maia platform, built on AI and NLP, addresses a key challenge for effectively using DSPs in light of the lack of in-depth analytics knowledge among marketers.
StartApp - Mar 29, 2022
Start.io Introduces Maia: Reinventing Mobile Audience With AI
Start.io launches Maia - Mobile AI Audience, an innovative AI and NLP-based platform that enables brands and agencies to explore and customize audience segments and target market demographics easily and accurately.
StartApp - Jan 26, 2022
2022 or 2020-Too? The Latest Market Insights Based on Mobile Audience Data
The second long year of the global pandemic was a challenging one for businesses, with behavioral shifts among consumers once again impacting markets and advertising strategy in ways both seen and hidden. The Start.io team conducted a deep dive analysis of a wide set of mobile audience data to uncover insights into consumer behaviors in 2021, compared to 2020, and how that might affect markets as we head into 2022.
StartApp - Jan 12, 2022