"Ethical Evolutions: Preserving Natural Balance in a Modern World" Season 1 to launch September 15, 2021. The show will delve into pivotal new technologies and the implications of their evolutionary impacts. 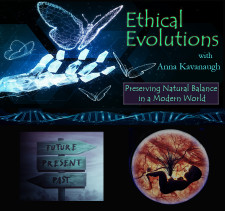 PORTLAND, Ore., June 18, 2021 (Newswire.com) - Ethical Evolutions with Anna Kavanaugh. Preserving Natural Balance in a Modern World. The show series will be produced by Living Eden Media and examines the full spectrum of human and environmental evolution relating to the integration and ethics of modern technologies as they merge and interface with our natural world, physical functions, and current societal perspectives. Episodes will delve into scientific, philosophical, and spiritually nuanced realms to explore the implications of contemporary practices that shape how we are changing our planet and potentially redefining humanity by our own hand.

Writer Anna Kavanaugh is set to host the series and hopes to increase public awareness about where trending integrative technologies are steering all aspects of nature and the life it sustains. In discussing the upcoming show, Kavanaugh explains:

"We are living in an unprecedented moment where for the first time the technological hand of mankind is integrally linked with our planet's natural process in all ecospheric life. Until now, whether you subscribe to Darwinism or Creationism, biological and geological evolution has proceeded at its own pace and by its own intrinsic mechanisms. But now, our human footprint is so heavily influenced by corporate and political motivation it has spawned the catalyzation of manmade interference into what was once a pristine evolutionary progression. How then does this redefine evolution as we have understood it, and ultimately will it redefine what it means to be human? Who makes these decisions, by what criteria and authority, and by what ethical parameters? I believe we need to have transparency and a collective conversation about what is happening in scientific application, how it will be used, and what our responsibility is as a species to implement it ethically with wisdom and foresight. That's what I really want to talk about in this series, and I'm so excited about the opportunity to do that."

The series is expected to be broadcast live with aired episodes available OnDemand via podcast thereafter. Release of the show is confirmed for a September 15, 2021, launch. Further schedule details will be published prior to the fall premiere.