GREENCASTLE, Ind., November 7, 2017 (Newswire.com) - ESPN Founder Bill Rasmussen, the legendary entrepreneur who single-handedly changed the way the world watches sports and television, returns to his alma mater, DePauw University (Class of 1954), to take part in a number of events during the week of the annual Monon Bell Classic, including delivering the prestigious Ubben Lecture on the evening of Wednesday, Nov. 8, in Kresge Auditorium in the Green Center for the Performing Arts.

While in Greencastle, Rasmussen will spend the week talking and working with students in DePauw’s Management Fellows and Media Fellows programs, as well as Rector Scholars, and will attend the 124th Monon Bell Classic football game between DePauw and Wabash on Saturday, Nov. 11, at Blackstock Stadium.

Rasmussen will also announce the pending launch by Hometown Networks of HTN Sports, a new 24-hour sports channel serving the fans of sports in every “hometown” across America and in every hometown around the globe. HTN Sports is the first crowdsourced sports network, designed by Rasmussen, the founder of ESPN.

“We are calling for creative content providers, advertisers, writers and videographers, interns and volunteers, as well as program sponsors and content managers, to be early adopters of HTN Sports,” Rasmussen said.  “Early adopters will benefit by having their content viewed and shared unlimited times.”

HTN Sports announced ProFile Sports as the first Preferred Provider on the platform. ProFile Sports makes it easy for scouts, recruiters and coaches to find the right player for their team.

Additional Information about the new HTN Sports is now available at http://www.HTNSports.com.

A gifted raconteur and a popular public speaker discussing American entrepreneurship, innovation and the birth of ESPN, Rasmussen is a frequent guest on television, radio and podcasts, including his July appearance on Fear{less} with Tim Ferriss on the AUDIENCE Network, produced by Vince Vaughn’s Wild West Productions.

On Sept. 7, 1979, ESPN went on the air for the first time. Entrepreneurial daring, irrepressible enthusiasm and a dash of good luck gave the world the first 24-hour television network. Once unleashed upon sports fans, ESPN’s impact forever changed the way we watch television. The man who had the dream, the founder of ESPN, is Bill Rasmussen.

Jim Miller, co-author of the best-selling book “Those Guys Have All the Fun: Inside the World of ESPN,” told John Ourand of the Sports Business Journal that “this is a guy whose idea gave birth to, arguably, the most successful media story of our time.”

Rasmussen founded ESPN in the summer of 1978. He had his innovative brainstorm for an all-sports cable TV network within days of his firing by the New England Whalers of the World Hockey Association on Memorial Day weekend. A former radio and television sportscaster, Rasmussen had been the Whalers communications director but when the Whalers didn’t make the 1978 WHA playoffs, most of the front office staff were fired, including Rasmussen.

The idea of an all-sports cable TV network captured his imagination, and he incorporated the fledgling network on July 14, 1978. He had already begun to seek out cable television companies, sponsors, investors and partners. With an idea that was truly ahead of its time, and running out of cash, Rasmussen found one investor who believed in the concept in February 1979, and by Sept. 7, 1979, ESPN was on the air for the first time, 14 months from Rasmussen’s moment of inspiration.

A life-long entrepreneur and sports fan, Rasmussen’s innovations in advertising, sports and broadcasting are numerous and include not only the creation of ESPN, but also the concept for “Sports Center,” wall-to-wall coverage of NCAA regular-season and “March Madness” college basketball, and coverage of the College World Series. He broke the advertising barrier to cable television by signing Anheuser Busch to the largest cable TV advertising contract ever.

“As founder of ESPN, I saw a company and an entire industry explode on the American television scene with breathtaking speed," Rasmussen said.

An economics major and Rector Scholar at DePauw, Rasmussen earned an M.B.A. from Rutgers University and is a veteran of the United States Air Force.  He has been a regular visitor to the DePauw campus, and returned in 2012 to present a 175th Anniversary Distinguished Alumni Lecture. Rasmussen was an executive-in-residence, meeting with students on campus (which he will do again this November), and sat down with Inside Indiana Business host Gerry Dick for an interview which aired on statewide television.

"I was a sophomore at DePauw when ESPN debuted. Today's students think of the network as an American institution like Apple or Coca-Cola," says Ken Owen '82, special adviser to the president and coordinator of the Ubben Lecture Series. "The fact that the concept for ESPN came from the brain of a guy who took classes at Asbury Hall and posed by the Boulder underscores a fact that is well known to people who love this college: DePauw produces people who change the world. Bill is excited to come to campus for Monon Bell week, and I'm delighted that our students will have special opportunities to hear his stories and interact with him."

Named “The Father of Cable Sports” by USA Today, Rasmussen was named to The Sports 100, honoring the 100 most important people in American Sports History. His place in sports history was further recognized by Sports Illustrated in 1994, when he was honored as one of the “40 for the Ages,” one of 40 individuals who significantly altered and elevated the world of sport in the last half of the 20th Century. He has been elected into numerous sports, business and television Halls of Fame, and received multiple business and academic awards (which are listed on his websites).

Rasmussen recounted the inside story of the birth of ESPN in his book “Sports Junkies Rejoice! The Birth of ESPN,” which gives the real insider’s account from the man who changed the landscape of television and sports forever.

Rasmussen is represented by Jim DeLorenzo of Jim DeLorenzo Public Relations for interviews and speaking engagements. Additional information is available at his website, http://www.ESPNFounder.com. 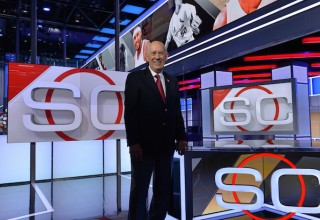 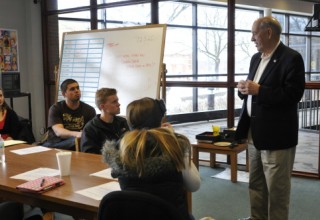