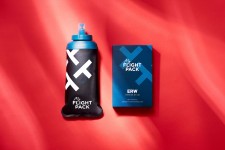 LOS ANGELES, January 15, 2020 (Newswire.com) - ​​​​​​More than 3 million people around the world travel on commercial aircraft every day with many resigned to battling their body clocks and fatigue after traveling long distances for work or play.

Now, the stars heading to Los Angeles for Hollywood’s biggest night will be among the first in America to be given the opportunity to combat jet lag and travel fatigue using My Flight Pack, a physiologically tailored, three-step, powdered hydration solution that helps conquer symptoms related to long air journeys.

My Flight Pack will be included in the Distinctive Assets "goodie" bags, independently gifted each year to nominees in the major acting and directing categories, including Renee Zellweger, Charlize Theron, Brad Pitt, Leonardo DiCaprio and Tom Hanks.

My Flight Pack is already a hit with professional U.S. sports teams who have been testing it out on players who often have to fly thousands of miles between games. Grammy®-nominated DJ Steve Aoki – the world’s most traveled musician, according to the Guinness Book of Records - has also spoken about how it has helped him. Now the product is available worldwide.

The breakthrough My Flight Pack formula was devised by top sports and TV chef Hannah Grant, famous for her Emmy-winning Amazon Prime cooking show ‘Eat, Race, Win,’ and leading nutrition scientist Dr. Stacy Sims, who used a cutting-edge combination of adaptogens and micro-nutrients to prompt the body into caring for itself.

“We’re absolutely thrilled about taking part in this historic Hollywood celebration and, surely, all participants will now get a chance to return from the party rested, energized and ready to turn in the next world-class performance," said Grant, author of ‘The Grand Tour Cookbook’ and ‘Eat, Race, Win’.

"Many don’t realize that the discomfort they experience during and after long-haul flights are due to both bad quality sleep and the dehydrating effects from the airplane cabin," said Carl-Emil von Arenstorff, co-founder of ERW, the Danish company behind My Flight Pack. “By combining trailblazing sports science with world-class culinary expertise, we’ve developed a solution that successfully tackles jet lag and travel fatigue through hydration."

For more information or to interview Hannah Grant, please contact:

And the Award for Best British Brand in the Goodie Bag Goes to…Charabanc, the Luxury Car Fragrance Accessory
DavidGardnerMedia - Jan 15, 2020