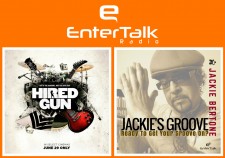 San Diego, Calif., June 28, 2017 (Newswire.com) - EnterTalk Radio, the undisputed leader in music business talk and programming, announced that its popular podcast show “Jackie’s Groove” featuring percussionist Jackie Bertone has joined forces with the upcoming documentary “Hired Gun” to put the spotlight on some great unsung musicians who play alongside some of today’s top artists. The one-night-only event is in theaters nationwide on June 29 sponsored by Fathom Events. View the trailer for the film here: https://youtu.be/P9VXLyh-BXQ

“Hired Gun” is the story of the musical talent responsible for the most famous instrumental solos in the world, who have toured with the musical legends who hired them. The hired gun community lives and breathes music, and, for the first time, its members share their incredible stories and exclusive musical performances with the world in this inspiring new documentary.

“EnterTalk Radio is to go-to source for great interviews, stories and content about the music industry like the Jackie’s Groove interviews of the Hired Gun cast,” said Florentino Buenaventura, CEO of EnterTalk Radio.

Based in San Diego, Calif., and founded in 2015, EnterTalk Radio is the undisputed leader in music biz talk with more than 15 syndicated programs on various music-related subjects airing 24 hours a day at www.EnterTalkRadio.com and via the EnterTalk Radio app, which is downloadable from the iPhone & Google app stores. EnterTalk Radio specializes in radio programming that speaks to the music professional about his or her respective area of interest. Radio shows are hosted by top music industry leaders such as Jackie Bertone host of “Jackie’s Groove”, John “JR” Robinson host of “Vinyl Night”, Terry Wollman host of “Making It!”, Tim Dolbear host or “Sound Experience”, Scott Robertson host of “May the Best Brand Win”, and Paul Nikolas host of Going To Get Loud. The company is comprised of entertainment professionals who have a comprehensive understanding of today’s music industry landscape and a passion to inform, educate and entertain audiences around the world that work in, are passionate about, or just intrigued by the entertainment industries. For more information, please visit www.entertalkradio.com or e-mail press@EnterTalkRadio.com.