Director and Producer Leon Melas documented the murals in a short video tribute. 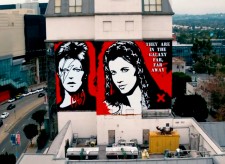 Created on the side of the Sofitel Hotel Los Angeles at the intersection of La Cienega and Beverly Boulevards, McNeilly’s portraits of Bowie as his alter ego Ziggy Stardust, and Fisher as perhaps her most memorable character Princess Leia, seem appropriately brought together with the tag: “They are in the galaxy far far away.”

When asked what motivated him to create this latest installation Mike McNeilly shared quotes from both artists that he felt spoke directly to him and his philosophy regarding his own creativity.  Regarding his own music, Mr. Bowie once mused: “On the other hand what I like my music to do to me is awaken the ghosts inside of me. Not the demons, you understand, but the ghosts.”  From the endlessly quotable Ms. Fisher and one of her most famous: “I don’t want my life to imitate art, I want my life to be art.”

A short video created by Director and Producer Leon Melas, documenting the David Bowie and Carrie Fisher tribute murals can be seen here:

Mike McNeilly has been creating his own iconic, large-scale murals and street art throughout Los Angeles, New York and around the world since 1969. He is an outspoken champion for artistic freedom of expression as well as altruism through images created for social impact. He has taken on issues ranging from censorship, AIDS, at risk and runaway youth, to creating tributes honoring first responders following the September 11, 2001 terrorist attacks. Over the years, his work has helped to raise awareness for numerous organizations including APLA, AMFAR, Project Angel Food and Children of the Night.  One of his latest endeavors is tackling the American homeless crisis through his organization “Liberty for the Homeless.”