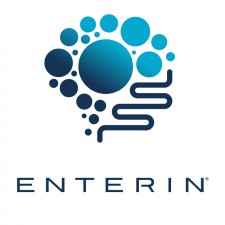 PHILADELPHIA, September 10, 2019 (Newswire.com) - ​Enterin Inc., a privately held, CNS-focused pharmaceutical company based in Philadelphia and developing novel compounds to treat neurodegenerative diseases, announces the publication of an article entitled “Colonic motility and jejunal vagal afferent firing rates are decreased in aged adult male mice and can be restored by an aminosterol.” The study was conducted at the Brain-Body Institute at McMaster University in Canada and published online in Frontiers in Neuroscience (DOI 10.3389/fnins.2019.00955).

The study demonstrated that colonic motility and neural signaling from the gut to the brain via the vagus nerve were significantly diminished in old mice compared to young mice. Importantly, the addition into the gut of squalamine, a compound originally discovered in the liver of the dogfish shark, restored colonic motility and vagal firing rates back to the levels in young mice. Similar findings from a pilot study were previously reported by the same authors in abstract form.

The nervous system of the gut is responsible not only for normal bowel function but also for healthy brain functioning. It coordinates the passage of food but also transmits vast amounts of information to the brain. As we age the gut’s nervous system “slows down,” resulting in constipation. Reduced activity of the gut’s nerve cells impairs gut-brain signaling via the vagus nerve and may account for depression and other neurologic symptoms. According to the lead author of the study, Dr. Christine West, the enteric nervous system appears to be particularly vulnerable to age-related degeneration and this, in turn, affects neural signals reaching the brain from the gut.

The senior author of the study, Dr. Wolfgang Kunze, a Professor at the Mind-Brain Institute said, “Our results show that vagal afferent firing is reduced in old age, but these changes are not permanent since the effects can be restored to within range of the young mice. This has profound implications for the treatment of neurodegenerative diseases in elderly individuals.”

ENT-01, a synthetic derivative of squalamine, is currently being tested in clinical trials involving patients with Parkinson’s Disease. The compound is given orally and acts locally on the enteric nerve cells of the gut. According to Dr. Michael Zasloff, the founder and Chairman of Enterin and discoverer of squalamine, the compound also displaces proteins that are electrostatically bound to intracellular membranes and, through this mechanism, suppresses aggregation of alpha-synuclein monomers into neurotoxic oligomers. He adds that “the pathology specific to neurodegenerative disorders such as Parkinson’s disease or Alzheimer’s disease is clearly superimposed on changes related to the aging process itself since these diseases occur in the elderly and not in the young.”

Enterin is currently conducting a randomized, double-blind, placebo-controlled trial (KARMET) to explore the effect of ENT-01 on constipation and neurologic symptoms in patients with Parkinson’s disease. The details of the study can be found on Clinicaltrials.gov (NCT#03781791). In an earlier Phase 2a study involving 50 patients with Parkinson’s disease and constipation, constipation was reversed in over 80% of patients. The study also found potential signals of clinical benefit for depression, cognition, hallucinations, sleep and circadian rhythm. The article is entitled “Targeting neurons in the gastrointestinal tract to treat Parkinson’s Disease” and was published online in Clinical Parkinsonism and Related Disorders (https://doi.org/10.1016/j.prdoa.2019.06.001).

Enterin Inc. is the first company to develop a novel drug that repairs the dysfunctional gut-brain axis in patients with neurodegenerative disease. Enterin Inc. is pioneering the medical community’s understanding of the link between infections, dysfunction of the enteric nervous system (ENS) of the gut, and the early onset and chronic progression of neurodegenerative disease. The lead compound, ENT-01, a synthetic derivative of squalamine, displaces membrane-bound alpha-synuclein (αS) aggregates from nerve cells in the ENS and improves neural signaling between the gut and the brain in preclinical models of Parkinson’s disease. In the gut, this results in improved motility. The compound also has profound rejuvenative effects on the aging mouse gut. Enterin Inc. is now progressing ENT-01 through clinical trials in an attempt to reverse the constipation and neurologic symptoms of Parkinson’s disease.

Enterin to Conduct a Randomized Phase 1/2a Study in Hospitalized Patients With COVID-19
Enterin Inc. - Apr 17, 2020