Thousands congregate in Los Angeles to celebrate the culmination of the greatest period of growth in Scientology history. 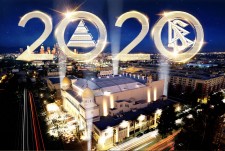 A Golden Age for Scientology.

And the launch of Scientology Network Television.

That’s just a glimpse of why the 2010s saw greater expansion for the Scientology religion than all previous decades combined.

“Yes, tonight we celebrate the fact we conquered time. Since, how else could anyone accomplish so much in ten fleeting years?” began Mr. David Miscavige, the ecclesiastical leader of the Scientology religion. “But, either way, our theme tonight is ‘Time.’ Time past, time present and what this decade signified in terms of a future that’s already preordained as glorious. So, lest anybody take it for granted, well, let’s just say, this is not only the best time to be a Scientologist, it’s also the best time to become a Scientologist.”

A DECADE FOR THE AGES

In evidence of an unprecedented ten years for Scientology worldwide, Mr. Miscavige proceeded with a stunning visual presentation highlighting a parade of epic achievements:

Further highlighting the end-of-decade celebration were presentations to honor L. Ron Hubbard’s technology in application across every sector of society in the name of a better world.

Bringing the night to an inevitable climax were the Grand Opening presentations of the very newest Ideal Organizations for 2019, including:

Finally, mirroring a decade of meteoric expansion, a highest ever number of Power Field Staff Members (FSMs) hailing from North and South America, Europe, Africa and Australasia were recognized for escorting at least 100 people onto and up the Bridge to Total Freedom in the past year. Crowning the presentation were over two dozen individuals specially awarded as Power FSMs of the Decade for having attained the status of Power FSM every year for the past ten years.

Whereupon, as thunderous applause reverberated in the packed-to-capacity Shrine Auditorium, the night’s celebration transcended to a tone of triumph. So it was, as the concluding moments of the Church’s most momentous decade drew near, Mr. Miscavige left one and all with a final word:

“With that, we arrive at the close of this evening’s event, and a moment to contemplate the next ten years. And the next, and the next and the next after that, until time runs its course and what L. Ron Hubbard told us is indeed fulfilled: That time is not behind us; it lies ahead in eternity; and we shall find ourselves in it, irrevocably. But either way, what is absolutely manifest destiny is all of us together for the next ten years. And in anticipation of which, I say: Happy New Year and Godspeed into eternity!”