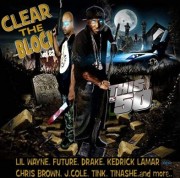 New York, NY, September 16, 2015 (Newswire.com) - ​​​​Rising hip-hop star and music producer Emar Mitchell is proud to announce the upcoming release of Clear the Block Mix Tape Volume 83, the latest addition to his growing portfolio and the 9th mix tape release for the dynamic talent in less than 90 days.

The mix tape, released in conjunction with a long-time and respected hip-hop producer, features the work of a myriad of talented artists from every corner of the hip-hop scene. As Mitchell’s 9th such collaboration, the mix tape also features the lyrical skill of Mitchell’s son Justin Birch, aka Fleek Justice, known throughout the industry as Hip-Hop’s First Autistic Rap Star.

"My mix tapes have basically snowballed into a tsunami effect."
Emar Mitchell

Emar Mitchell’s work with Murphy, which features multiple submissions on Clear the Block Mix Tape Volumes 75-82, has translated into considerable success for the emerging rap star, including the release of numerous hit tracks over the last three months. Past volumes, produced via thisis50.com and available at audiomack.com, showcase an enviable flair for eclectic beats and mesmerizing lyrical flow, as well as demonstrating, time and again, a genuine and extensive knowledge of the work and skill needed to create both a powerful and impactful musical collaboration. The volumes display not only Mitchell’s love of the craft, but also the ability and willingness to work with others in the development of something truly transformative, perhaps even groundbreaking.

“My mix tapes have basically snowballed into a tsunami effect,” says Mitchell, a current Rockland World Radio personality. “I didn’t think I had what it takes to create so much work in such a little time. I still don’t fully understand what I have accomplished, nor how much I have gained from my work.”

The mix tapes, says Emar Mitchell, are the primary catalyst behind much of his recent success, including the opportunity to host Fl33knation Radio, his very own online radio show. The show, featured as part of the Rockland World Radio’s Monday night lineup, affords Mitchell not only the chance to entertain audiences with live, on-air performances, but also to conduct interviews with new and up-and-coming hip-hop artists. Their candid discussions range from current events to other happenings throughout the world.

Emar Mitchell, whose recent successes have included a role in the motion picture “Frank Chase: The Streets of Harlem,” is grateful for the many opportunities his mix tape collaborations have provided him. His ultimate goal, however, is not just to continue his own success, but to transform his recently acquired fame into the chance to make a positive and tangible difference in the lives of young artists.

“My plan is to help others succeed in life,” says Mitchell. “I think I could make lives better by helping give people an opportunity to make their dreams come true. I would like to be seen, and known, as a positive influence on not just myself, but others as well.”

For Mitchell, music is a passion, one that continually drives him to both create and record as much and as often as possible.  As both an experienced musician and noted producer, Mitchell looks forward to developing and selling new beats to up-and-coming artists, as well as to serve as a constant source of inspiration and positive influence in their lives.

About: Emar Mitchell is a radio personality for Rockland World Radio, as well as a rising star on the hip-hop scene. His radio show, Fl33knation Radio, can be heard every Monday from 7-8 PM at Rocklandworldradio.com.