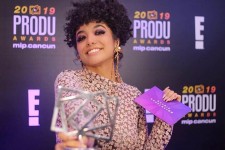 Hailed as the “Latin Entertainment highest honor”, The PRODU Awards is comprised of industry experts who evaluate the work of their peers in 39 different categories to recognize excellence in television produced in Spanish within the U.S. and Latin America.

Amongst the winners of the night, was NBCUniversal Telemundo, which received a total of eight PRODU Awards for its productions; while Disney won five; Warner Media four; Netflix and Caracol TV tied for three, and Televisa and Discovery got two. Argentina rose as the country most awarded (15 awards), followed by Mexico (10), USA (6) and Colombia (4).

Elyfer Torres is a SAG-AFTRA member most recognized for her leading role in Telemundo’s hit original production “Betty en NY,” a modern adaptation of the television global phenomena “Yo Soy Betty la Fea.” She is also known for her roles in series EL SECRETO DE SELENA (2018) and NICKY JAM: EL GANADOR (2018). Elyfer specialized in acting for cinema at the renowned New York Film Academy in Los Angeles and is a classically trained dancer from the Royal Academy of Dance in England.

About The PRODU Awards:

PRODU, founded in Miami, Florida, in 1989, is the main editorial group of the entertainment business in Latin America, with 30 years in the market reporting on the traditional television business and its current transformation. The Awards recognize excellence in Latin productions and is celebrating this year its third edition. www.produawards.com