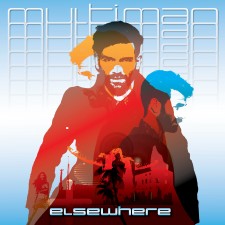 Until now, “Don’t You Believe Me Baby” was such an obscure rarity that even many of The Police’s most rabid fans hadn’t heard of it. In fact, the lyric video that Elsewhere posted has accumulated over 189,000 views, compared to only 64,000 for a video clip featuring the audio of Sting’s demo. The video subsequently landed the band a full-page story in The Boston Herald. It was a track that was considered for The Police’s hit album Ghost in the Machine but was scrapped. It features Sting’s scratch vocals without Andy Summers or Stewart Copeland.

Aroian came upon the demo while listening to old concert footage by his favorite bands on YouTube. He says, “I learned that it was a demo featuring the keyboardist who played on ‘Every Little Thing She Does Is Magic.’ I thought it was extremely cool and did a little research to learn that we could record it commercially as long as Sting and the publisher were credited. So when Elsewhere began working on the Multi-Man EP, I thought it could be a song worthy of being re-created. We love how it came out. The idea was to modernize it like the answer to the question ‘What would Sting, Andy and Stewart have done if the song had made their album?’”

Aroian also felt that the theme of the track – about infidelity – tied thematically to several tracks on Multi-Man, several of which deal bluntly with the fallout from troubled relationships. The title track “Multi-Man” is about love addiction or the idea of allowing any sort of emotional addiction overtake our lives. Some may not think it’s as harmful as substance abuse, but Elsewhere’s here to tell us it can be just as damaging.

Along those lines, the high octane “Codependency” tackles the notion that even when it’s the best for both parties in a relationship, it’s harder to break free than anyone initially imagines. “(We’ve Got A) Movement” is a whole different ballgame, a socially conscious rock anthem, inspired by the Arab Spring era, about the way the masses can come together to make major changes.

Elsewhere has been a popular Boston band on and off for many years, initially achieving notoriety for their 1997 album Outbound, which earned them slots at the College Music Journal (CMJ) Marathon and numerous showcases in NYC where major labels showed interest – back in the day when that was the ultimate ticket to wider fame. The band later released the EP Perception in the early 2000s before achieving an international breakthrough with their widely acclaimed 1981 album in 2010. In addition to Belgium, where they received a write-up in one of the country’s biggest rock magazines (Rock Tribune), they became popular and received great press in Germany, Denmark, Norway, U.K., Italy, Czech Republic and other countries – all while continuing to hold court at top clubs in their home base of Boston and NYC.