Effie Miri's New Book "Iran, How a Culture Develops Pathology: The Pathology in Transition" Is a Telling Window Into the Life of an Iranian in the Present Day Society.

Recent release "Iran, How a Culture Develops Pathology: The Pathology in Transition" from Page Publishing author Effie Miri, Ph.D. is both enlightening and educational; this work depicts the culture, religion and psychology of Iran. 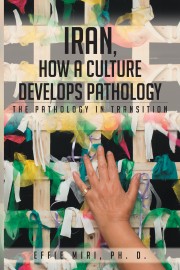 Published by New York City-based Page Publishing, Effie Miri’s mesmerizing autobiography is told as a reflection of the author’s personal experiences as she early on was forced to navigate two very different cultures on two very different continents. Her life experiences through this trying time as well as her later career as a psychotherapist, treating many Iranian Americans, compelled her put her life to paper. Her goal: to provide the reader with a story-like page-turner that is also informative, designed to educate those who may have shared her wild journey.

The author chose this title for her book because through her personal and her patients’ experiences, she believes the Iranian culture can breed fear, insecurity, self-doubt and even dishonesty in the people she lovingly describes as sharp, ambitious, and hardworking. On the one hand, boys develop a sense of dominance, grandiosity, narcissism that in actuality has true undertones of ignorance. While on the other hand, girls face the risk of developing a sense of passivity, inferiority, anxiety, anger, and at times even paranoia. The repercussions of this dichotomy she believes, are deep and create psychological pathology. The main intention of this book is by no means meant to be a religious or political commentary, but as Iranian people are in essence, religious, the conversation does include Islam. She argues, religion is beautiful, and Islam is no exception. But, the often-bastardized product of many past and present religious leaders, whose qualifications she questions, is ugly: the outcome, fear of God and His potential punitive punishments. Herein lies another source of pathology. She devotes a good deal of the book to enlighten readers both Iranian and otherwise, to the essence soft side of Islam to which general Muslims are often not exposed. From the Prophet Mohammad himself of Sufi mystics, the author focuses on spirituality rather than aggression, citing works of Hafez, Saadi, Mowlana Rumi, Baba Taher, and Shams Tabrizi who expressed the same approach of Sufism.

Let’s go back in time now to 1979 and to the years prior that lead to the Iranian revolution. The author’s argument is that in light of this cultural mentality, foreign countries found opportunity to meddle and assert their influence and personal goals. The Iranians themselves could not identify this cultural weakness and were not in touch with their own identity and took to the streets in demonstration supporting new religious leaders whom aggressively stoked the fires of anti-west propaganda and rhetoric that lead to a blaze of events. In the ashes, lay a country with a leader whom they did not even know; A leader, who would only again propagate this circle of pathology.

It is the intention of author to help Iranians to learn about their psychology, to develop self-recognition and self-identity to become less confused.

“My attention has been on the training and parenting issues throughout the book. I am wondering how a confused parent can raise a not confused kid.” says author, Dr. Miri.

Readers who wish to experience this profound work can purchase “Iran, How a Culture Develops Pathology: The Pathology in Transition” at bookstores everywhere, or online at the Apple iTunes store, Amazon, Google Play or Barnes and Noble.

For additional information or media inquiries, contact Page Publishing at 866-315-2708.

Page Publishing is a traditional New York based full-service publishing house that handles all of the intricacies involved in publishing its authors’ books, including distribution in the world’s largest retail outlets and royalty generation. Page Publishing knows that authors need to be free to create - not bogged down with complicated business issues like eBook conversion, establishing wholesale accounts, insurance, shipping, taxes and the like. Its roster of authors can leave behind these tedious, complex and time consuming issues, and focus on their passion: writing and creating. Learn more at www.pagepublishing.com.

Page Publishing is a New York based full-service publishing house. We handle all of the intricacies involved in publishing your book, getting it onto bookstore shelves and generating your royalties.

Lana Bischoff's New Book 'SAVED' Unravels a Riveting Fantasy Across Different Worlds and Extraordinary Magic
Recent release 'SAVED' from Page Publishing author, Lana Bischoff, is an out-of-the-ordinary journey of a dying pre-teen who comes across a magical dragon without the knowledge that this encounter will forever change his life.
Page Publishing - Mar 19, 2021

Thomas A. Brigger's New Book 'Beyond the Higher Ground' is a Riveting Story About a Man's Redeeming Opportunity After a Harrowing Tragedy
Recent release "Beyond the Higher Ground" from Page Publishing author Thomas A. Brigger is a gripping tale of a man who journeys to find salvation from his loss, only to be caught in a dilemma of drugs and violence.
Page Publishing - Apr 8, 2020

Author Anthony S. Luciano Raimondi's New Book 'When the Bullet Hits the Bone' is a Compelling Reflection on His Childhood and Career in a Notorious New York Crime Family
Recent release "When the Bullet Hits the Bone" from Page Publishing author Anthony S. Luciano Raimondi is a fascinating inside glimpse of life in what is now referred to as the Colombo crime family. From the homemade pasta dinners at his mother's table to spending time with his uncle Lucky Luciano, this memoir is a rare account of the human characters in a notorious Mafia crime syndicate.
Page Publishing - Feb 13, 2020