Legacy Distribution's feature-length biography, Eddie Murphy: Laugh 'Til It Hurts, explores the global comedian's meteoric rise to success, the highs and lows of his career and his triumphant comeback. 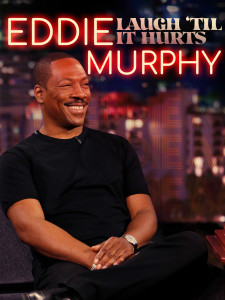 HOLLYWOOD, Calif., March 5, 2021 (Newswire.com) - In celebration of the long-awaited sequel to the 1988 blockbuster Coming to America, Legacy Distribution is proud to present the compelling feature-length biography Eddie Murphy: Laugh 'Til It Hurts. The film explores the global comedian's meteoric rise to success, career highs and lows, and triumphant comeback.

Brought up by a single mother in Brooklyn, New York, where he is voted the most popular kid in his high school graduating class, Murphy credits humor for helping him through his humble beginnings. By age 19, he is on Saturday Night Live, and his unforgettable characters such as Mister Robinson and Buckwheat so revived the show; he is now considered one of SNL's top cast members of all time. Fast forward to 2020, and Eddie Murphy wins a Primetime Emmy as guest host of one of the most-watched Saturday Night Live shows in its forty-year history.

His 48 Hrs. big-screen debut in 1982 led to the Beverly Hills Cop series, Trading Places, The Nutty Professor, and Dr. Dolittle. By the end of the '80s, Murphy was one of the biggest Box Office draws in Hollywood.

36 films and almost 7 billion dollars later, Murphy has brought us Shrek's adorable Donkey, his Academy Award-nominated role of James 'Thunder' Early in Dreamgirls, and Rudy Ray Moore in Netflix's Dolemite Is My Name. But Murphy also had his share of flops and failures, compounded with a Hollywood prostitute scandal. A multi-year reset later, Eddie Murphy is back as Zamunda's Prince Akeem in his long-awaited sequel, Coming 2 America.

"Since he first debuted on Saturday Night Live, Eddie Murphy has paved the way for a whole generation of comedians on stage and screen," says Legacy Distribution CEO, Dana Webber. "Laugh 'Til It Hurts cleverly shows what makes Eddie Murphy such a trailblazer and why he continues to be one of today's best-known comedians."

On the cusp of his 60th birthday (April 3, 1969), the father of ten, Eddie Murphy, continues to be loved by fans for his infectious smile and goofy laugh. Learn about many challenges Eddie is faced with along his way to stardom as Eddie continues to make his fans Laugh 'Til it Hurts.