ECNL, the Nation's Premier Youth Soccer League, Launches 11th Season With 'More Than a League' Programming to Raise the Game for All Players 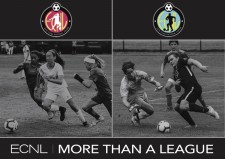 RICHMOND, Va., November 4, 2019 (Newswire.com) - ​​​​​​​​The nation’s leading development league for youth soccer, the Elite Clubs National League (ECNL), today celebrates its 11th season of girls competition and third season of boys competition with the addition of new programs designed to enhance the player experience, share resources and reach into communities and homes across the country.

Since its inception in 2009, ECNL Girls has provided the elite development platform for more than 50,000 of the nation’s top female soccer players, achieved a college attendance rate of 99%, produced more collegiate players than any other youth league with approximately 90% of ECNL female players moving on to college soccer careers, and proudly counts nearly 25% of the women on the recent 2019 World Cup roster as ECNL alumni. Founded in 2017, ECNL Boys has rapidly gained prominence and recognition for top-level male competition, now including 90 clubs with the addition of the new Northwest conference this year and players being called into youth national teams by multiple countries around the globe.

“From the beginning, the mission of the ECNL has been to Raise The Game.  When looking at the success of our players at the collegiate level, on the world stage, and in all kinds of careers, it’s clear that the ECNL is helping do that and much more for youth players,” said Christian Lavers, President, ECNL. “As we launch into our next decade, we have a renewed purpose to be more than a league.  We plan to continue to help develop the country’s best youth players but also to lead by sharing resources and expanding our impact in more communities and with more players who aspire to achieve.”

With both its male and female competition, the ECNL includes clubs and teams from more than 30 states across the country and will field more than 20,000 players between the ages of 12-19 years old during the 2019-2020 season. These players are among the nation’s top 1% of youth soccer players.

Now, in recognition that more than 10 million people in the U.S. play soccer, with one in three households having a soccer player and the popularity of the sport tripling in the last decade, the ECNL is embracing its role as a leader in both elevating the game for the elite ECNL players and also leading the way in supporting the needs and development of all players.

The ECNL will roll out a series of More Than A League programs to support players in the ECNL and in communities across the country. Under the banners of Leaders Play Here for the girls and Always Be More for the boys, the ECNL will introduce new offerings throughout the season:

“As the world’s top league for the development of female youth soccer players, the ECNL has a history of staying ahead of what’s next to ensure that our programs are leading the way in meeting the needs of top youth female athletes,” said Jen Winnagle, Commissioner, ECNL Girls. “Now, with thousands of ECNL Alumni in the workforce and studies revealing the correlation between athletes and women’s leadership, we are again expanding our offerings.”

“In just three seasons, the ECNL Boys is already changing the expectations for what an elite national league for the nation’s top youth male soccer players should look like,” said Jason Kutney, Commissioner, ECNL Boys. “As the love for the game continues to grow in this country and expectations elevate, it is the individuality and competitive grit of this league that will undoubtedly help to inspire more positive change.”

More Than A League programs spanning Leaders Play Here and Always Be More:

For more information about the ECNL Girls or the ECNL Boys, and to learn about the ongoing rollout of community-based programs, visit eliteclubsnationalleague.com or boysecnl.com.

About Girls Elite Clubs National League: The Girls Elite Clubs National League (ECNL Girls) was founded in 2009 to enhance the developmental experience of female youth soccer players in the United States through: (i) improving the competitive environment through the creation of a true national competitive league; (ii) improving the process for identifying elite female soccer players through a systematic scouting and identification program based on national competitions; and (iii) improving the daily training environment at top female youth soccer clubs through developing best practices and training and organizational guidelines for its member clubs. The ECNL Girls is sanctioned by US Club Soccer and is sponsored by Nike Soccer.

About Boys Elite Clubs National League: Boys Elite Clubs National League (ECNL Boys) was founded to provide a top-class, club-based development, training, and competition platform for youth male soccer players in the United States. The mission of the ECNL Boys is to improve the landscape for players in the United States through innovative, player-centered programming that raises standards of quality and improves the player experience in all aspects of the game.

The ECNL Boys is sanctioned by US Club Soccer and is sponsored by PUMA North America.