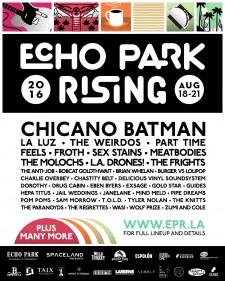 Los Angeles, Ca , July 21, 2016 (Newswire.com) - (July 21, 2016 - Los Angeles)  Echo Park Rising has announced its 2016 lineup. Chicano Batman, La Luz, the Weirdos are among the dozens of bands playing the sixth annual Echo Park Rising, which expands to more venues and features (for the first time) a family stage on its four-day run Aug. 18-21.  Other local L.A favorites performing are The Frights, Harriet Brown, Meatbodies, Mind Meld, Part Time and L.A. Drones. You can check out the full line-up here.

The outdoor main stage at the intersection of Liberty and Reservoir will transform into a street festival destination with viewing areas, craft beer gardens, vendors and food trucks. This year’s festival welcomes two new performance venues, The Semi-Tropic and The Whisperer, both will host hand-picked lineups.

"In addition to adding a family stage for kids, I felt that it was time that a festival genuinely puts 'Girls to The Front' with women-fronted bands, La Luz, Dorothy, Feels, Sex Stains, Shannon Lay and Jaime Wyatt. It's rare that any festival showcases female musicians and DJ's so this year I wanted to take this opportunity to highlight the talented women who rock the music industry and Echo Park Rising," says Elizabeth Garo VP of Talent for Spaceland Presents.

VP of Talent for Spaceland Presents.

The weekend of Echo Park Rising is, for most businesses in the area, the busiest weekend of the year, with 10,000 guests per day and growing in popularity each year. In addition to the lineup of artists performing, shops, galleries, restaurants come together to celebrate the vibrancy of this eclectic boulevard.

“The festival has always been stellar for our local businesses and with the proceeds of the festival going to our forth-coming Business Improvement District, we are especially excited that Echo Park Rising tangibly gives back to Echo Park in so many positive ways.” says KamranV, Echo Park Chamber of Commerce President.

Echo Park Rising was created by the Echo Park community as a pop-up impromptu street fair after the 3-decade-old Sunset Junction was shuttered by city officials. The result was a new kind of celebration, one that participants said better mirrored the spirit of the community by creating an open environment to build upon a thriving community celebrating the efforts of the innovative businesses, local eateries, artists and musicians that call Echo Park home.

Echo Park Rising neighborhood festival is presented  by the Echo Park Chamber of Commerce and produced by Spaceland Presents.

Stay In The Know and Up To Date

Always Free and All Ages Welcome

We are a small boom making loud noise ( but remaining humble) in the L.A Music Scene

Alhambra's New Music Festival, Mainfest, Will Kick Off for the First Time and Debut With Capital Cities, Miami Horror, Nite-Funk and Many More of the Same Ilk! Full Line Up Is Announced.
Spaceland Presents - Jul 13, 2016
Newswire