Ebola detection kits for humans and animals are now possible using ADI antibody or antigen ELISA kits with results in less than 2 hours. Ebola Rapid test cards, similar to pregnancy tests, have also been developed that provide results in 2-10 mins. 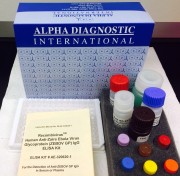 San Antonio, TX, October 22, 2014 (Newswire.com) - San Antonio, Texas-based Biotech Company Alpha Diagnostic Int'l (ADI) has developed and released several convenient, rapid, and sensitive ELISA test kits for the detection of major Ebola viral protein antibodies (Glycoprotein, GP; Nucleoprotein, NP, and Viral Protein 40 or VP40).  The antibody ELISA kits are available not only for human samples but also for monkey, dog and mouse as some of the Ebola vaccines are first tested in the animal and primate model.

Dr. Kent Brantly, the first American to return to the U.S. from Liberia and then survive Ebola, has donated blood for transfusions to other patients, including Nurse Nina Pham who contracted Ebola while taking care of a Liberian patient who succumbed to Ebola.  ADI’s Ebola virus antibody ELISA kits can be used to determine if Dr. Brantly, or any other potential Ebola survivors, actually has the antibodies prior to giving a blood donation.  “More importantly, a population survey can be done to determine the immunity levels of Ebola in endemic regions,” said Dr. Masarrat Ali, Director of ADI.  The levels of antibodies sufficient enough to provide immunity also need to be established.  ADI has made similar antibody kits for dog and pig to establish if the animals from Ebola endemic regions have any circulating Ebola virus protein antibodies and, therefore, exposed to Ebola virus.  The antibody ELISA kits are highly sensitive and need only a tiny drop of blood or serum to conduct the test within two hours.

More importantly, a population survey can be done to determine the immunity levels of Ebola in endemic regions. The availability of these kits should help diagnose Ebola in humans and animals and allow for rapid testing of various Ebola vaccines.

The United States, United Kingdom, and Canada have started clinical trials on the most promising candidates for Ebola vaccines.  These vaccines use an adenovirus (chAd3) or vesicular stomatitis virus (VSV) vectors to deliver one of the most antigenic Ebola virus’s Glycoprotein (GP) in order to induce antibodies in humans or primates.  “ADI’s Ebola virus GP antibody ELISA tests along with the chAd3 and VSV protein antibody ELISA kits will allow for immediate assessment of vaccine efficacy,” said Dr. Ali.

Zmapp, an experimental therapeutic cocktail of three humanized GP monoclonal antibodies, has been used in some Ebola patients in order to neutralize the Ebola virus.  The U.S. Department of Health and Human Services has provided $42.3 million to help San Diego-based Mapp Biopharmaceutical accelerate the development and testing of ZMapp.  ADI has developed ELISA kits to not only measure the Zmapp antibody concentration in its purified form but also after infusion to humans or animals.  For example, it is possible to establish the levels of Zmapp in Dr. Brantly’s blood immediately after the first dose and then weeks and months afterwards.  It is also now possible to assess what levels of Zmapp, natural antibodies, or antibodies induced by vaccines are sufficient to prevent an Ebola infection. The Ebola antibodies test is conducted in less than two hours in a laboratory in field setting with minimal instruments or equipment.

Additional rapid tests, similar to pregnancy tests, have been developed to quickly identify and assess the activity of Zmapp in 2-5 minutes.  “These tests will not only help in the manufacturing and quality control of Zmapp but also prevent any fraudulent marketing of the drug,” said Dr Ali.

ADI has also developed the Ebola virus GP antigen and antibody rapid tests to quickly help identify potential exposure to the virus.  The rapid tests, when approved by FDA, can be used in field settings, doctors' offices, pharmacies, airports, or borders.  The tests require no instruments and can be used by any laboratory personnel.  ADI is the first company to develop and release a number of Ebola tests.  ADI is contacting the CDC and health officials in Texas to donate some of these kits.  “The availability of these kits should help diagnose Ebola in humans and animals and allow for rapid testing of various Ebola vaccines,” said Dr. Ali.