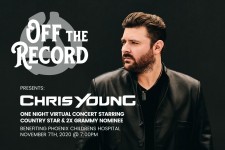 MESA, Ariz., October 28, 2020 (Newswire.com) - ​​Chris Young will headline Off the Record, the annual fundraiser for the Phoenix Children's Hospital Foundation hosted by major sponsor, Earnhardt Auto Centers. The multi-platinum country music entertainer has many hits including "I'm Comin' Over", "Drowning", "Gettin' You Home (The Black Dress Song)", "You", "Raised on Country", and "Losing Sleep."

"For the first time ever, Off the Record will be online, but it is important that the show go on," explained Bull Earnhardt, the General Manager of Earnhardt Lexus. Built to handle large public events, Earnhardt Lexus has previously hosted the Off the Record Concert. "While social distancing prevents us from hosting this live event in person, it hasn't changed the need to assist this terrific children's hospital. This event has raised over $1 million in 4 years for the important work at Phoenix Children's Hospital, and the help is needed now more than ever."

"We would like to reach out to all Chris Young fans as well as the many people who support the work of PCH in the Phoenix area," Bull continued. "As either $99-ticket holders or sponsors, fans can stream this event wherever they happen to live."

"An added benefit this year, all PCH hospital patients, healthcare staff and frontline workers will have access to the concert," Bull explained. "This was a major factor for Chris when he agreed to do this private concert! It was another reason that Earnhardt Auto Centers is excited to sponsor this vital event."

The concert will be live online on Nov. 7, 2020, at 7 p.m. Tickets and sponsorships are available now through the PCH Foundation website.

As President of the PCH 50, Bull is one of 50 Phoenix-area business leaders who have dedicated themselves to the mission of Arizona's only free-standing pediatric hospital. "The need is always great but especially this year," he said  "We really wanted to show our support, to these sick children who endure so much while having only limited visitation due to Covid. We also wanted to honor everything the staff has done to answer the needs of our community."

Founded in 1983, Phoenix Children's Hospital has grown to be one of the largest pediatric healthcare systems in the country. With almost 1000 specialists covering some 75 subspecialties, it is also the most comprehensive children's care facility in Arizona.

"I am proud to say that U.S. News and World Report has named PCH one of the best children's hospitals," Bull said. "With the public's help, we can keep it that way."

Founded by Tex Earnhardt as a single dealership with a single car in 1951, Earnhardt Auto Centers is still a family business. It has grown, however, to include 23 dealerships at 21 locations, serving the greater metro areas of Phoenix and Las Vegas.