Drug prevention group seeks to reach youth before they begin to experiment with drugs. 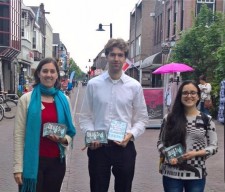 Aalsmeer, Netherlands, May 17, 2016 (Newswire.com) - Volunteers from the Netherlands chapter of the Foundation for a Drug-Free World are continuing their country-wide drug prevention initiative, bringing the truth about drugs to the North Holland city of Aalsmeer, 8 miles southwest of the group’s headquarters in Amsterdam.

Nearly 25 percent of the country's youth age 12-19 have used cannabis and some 5 percent have used hard drugs, according to the Foundation. The volunteers counter drug abuse with information. The Truth About Drugs series of 14 booklets present factual information on the most commonly abused drugs. The groups is also carrying out a campaign to broadcast their award-winning drug information spots on several regional television stations.

"Those under the age of 21 who experiment with drugs are much more likely to become addicted."
Foundation for a Drug-Free World volunteer

“Those under the age of 21 who experiment with drugs are much more likely to become addicted,” said one of the volunteers. “And because they are not yet fully grown, the effects of these drugs can be much more severe than on adults. We know of instances where cannabis use by teens has triggered psychosis, which they may continue to experience the rest of their lives.”

The Foundation for a Drug-Free World is a nonprofit organization headquartered in Los Angeles, California, and dedicated to the eradication of illicit drugs, their abuse and their attendant criminality. The Drug-Free World campaign is predicated on the statistically proven fact that wherever young people are presented with the unvarnished truth about drugs, illicit usage drops.  The Church of Scientology supports the Foundation for a Drug-Free World, making the group’s drug education materials available free of charge to educators, law enforcement, parents, mentors and community and religious groups .