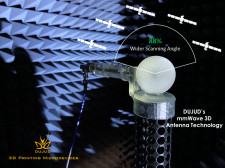 ATLANTA, July 21, 2021 (Newswire.com) - DUJUD (DBA Micro 3D Systems) today announced it has been awarded a contract by the United States Special Operations Command (USSOCOM) to develop a power-efficient man-portable SATCOM terminal to interface into the SpaceX Low Earth Orbit (LEO) commercial satellite constellation network known as STARLINK. Said terminal will exhibit a backpack form-factor at half the size of current STARLINK terminals (i.e., DISHY) with 30 to 40% less power consumption at identical data transmission speeds. The underlying technology is based on the first-of-its-kind DUJUD's 3D antenna scheme that allows for a significantly wider scanning angle (i.e., horizon-to-horizon SATCOM coverage) while reducing power consumption to the level that the terminal will be battery operated.

The U.S. government is seeking to add a new capability for gaining access to the commercial SATCOM network STARLINK via DUJUD's technology for applications that demand portability; said capability was previously unattainable due to the limited scanning angle of conventional SATCOM terminals. Currently, it is challenging — if not impossible — to employ conventional SATCOM terminals on moving objects; specifically, when a person is on the move and needs to be uninterruptedly connected to the internet via LEO satellite constellations, 2D antennas fail to provide a robust communication link.

Through this contract, the USSOCOM intends to address fundamental limitations with 2D phased-array antenna systems that the STARLINK's DISHY is based on. The development of this new SATCOM terminal which is based on DUJUD's proprietary 3D antenna technology (patent pending) will not only reduce power consumption by 40% and form-factor by 50%, but it will also address the high cost of manufacturing.

"Commercial SATCOM-based internet service providers such as SpaceX are challenged by the cost of SATCOM terminals that seems to be a financial barrier for many end-customers. DUJUD's 3D antenna-based SATCOM terminal, on the other hand, demands notably fewer supporting electronics and, as a result, it features a significantly lower cost of production," said Dr. Reza Abbaspour, CEO, DUJUD.

"The U.S. Department of Defense (DoD) and DUJUD have previously partnered in the past three years to implement a SATCOM receiver at the extremely high frequency spectrum. We believe DUJUD's technology will be a great use for both the DoD and the commercial sector. We will increasingly be pursuing SATCOM operators to utilize our technology while working with the DoD to expand our relationship for many other defense applications such as radar systems," said Dr. Reza Abbaspour, CEO, DUJUD.

DUJUD is a tech company that conducts cutting-edge semiconductor research using additive manufacturing schemes for electronic applications. For more information, contact us at media@dujud.com or http://www.dujud.com.