Seattle Scientologists attend a drug prevention workshop to hone their skills in reaching teens with the truth about drugs. 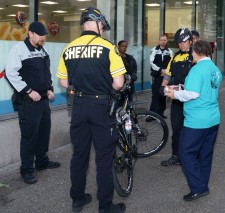 Seattle, Washington, May 31, 2016 (Newswire.com) - A team of volunteers from the Church of Scientology were put through their paces in downtown Seattle by Robert Galibert, French toxicologist and the driving force behind the Non à la drogue, Oui à la Vie (No to Drugs, Yes to Life) Association of France.

Galibert, who earned the International Association of Scientologists Freedom Medal in 2010 for his work in drug prevention, has been conducting workshops at Scientology Churches around the world to activate and train volunteers on this vital campaign.

"For every dollar spent on prevention, at least ten can be saved in future health, social and crime costs."
United Nations Office on Drugs and Crime

According to the United Nations Office on Drugs and Crime, “For every dollar spent on prevention, at least ten can be saved in future health, social and crime costs.”

Galibert shared his “secret weapon” with the Seattle volunteers: Communication. He is willing to talk to anyone about the dangers of drugs. He has even set up information booths at rave clubs, where he engages young people in honest discussions of the effects club drugs can have on their lives.

Equipped with copies of The Truth About Marijuana booklets, the Seattle volunteers canvassed the neighborhood around Pike Place Market. They handed out hundreds of booklets to law enforcement officers, taxi drivers, tourists, shoppers and local residents.

Concerned about reported increase in cannabis use in the city, Church volunteers had already begun attending conferences and conventions and carrying out street hand-out events. Over the past year they distributed more than 46,000 copies of educational materials in Washington State and they are now determined to increase the impact of their work exponentially.

For more than 20 years, the Church of Scientology has garnered the support of its members in community-wide programs which today form the largest nongovernmental drug education campaign in the world. Through the Church’s efforts, hundreds of millions of people have been reached with factual information about drugs through hand distribution of The Truth About Drugs booklet series, drug awareness events, media, Internet sites, mailings, billboards and educational videos and films.

In partnership with the Foundation for a Drug-Free World, an organization dedicated to providing factual educational materials about drugs, the Church of Scientology sponsored and produced a series of 16 award-winning public service announcements and a feature-length documentary based on some 200 interviews with former drug users.

For more information or to obtain free educational materials, visit the Scientology website.